At the headline level, July’s Retail Sales report disappointed as the reading missed expectations by nearly a full percentage point.  Just as soon as the report was released, we saw a number of stories pounce on the disappointment as a sign that the economy was losing steam.  Looked at in more detail, though, the July report wasn’t all that bad.  While the headline reading rose less than expected (1.2% vs 2.1%), Ex Autos and Ex Autos and Gas, the results were much better than expected.  Not only that, but June’s original readings were all revised higher by around a full percentage point.

Besides the fact that this month’s report was better underneath the surface and June’s reading was revised higher, it was also notable as the seasonally-adjusted annualized rate of sales in July hit a new record high.  After the last record high back in January, only five months passed until American consumers were back to their pre-Covid spending ways.  For the sake of comparison, back during the Financial Crisis, 40 months passed between the original high in Retail Sales in November 2007 and the next record high in April 2011. 5 months versus 40?  Never underestimate the power of the US consumer! 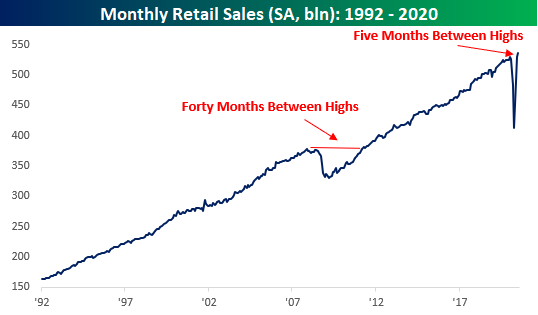 While the monthly pace of retail sales is back at all-time highs, the characteristics behind the total level of sales have changed markedly in the post COVID world.  In our just released B.I.G. Tips report we looked at these changing dynamics to highlight the groups that have been the biggest winners and losers from the shifts.  For anyone with more than a passing interest in how the COVID outbreak is impacting the economy, our monthly update on retail sales is a must-read.  To see the report, sign up for a monthly Bespoke Premium membership now!