After a much better than expected ADP Private Payrolls report on Wednesday and today’s Jobless Claims report, which was the lowest since last April, US employment data has really shown signs of improvement after a shaky December.  While a strong labor market would normally stoke fears of a tighter Fed, there is widespread agreement that Powell and Co. will not be raising rates anytime soon.  Eventually, that will change, but until it does, the market is reacting positively to positive economic news. 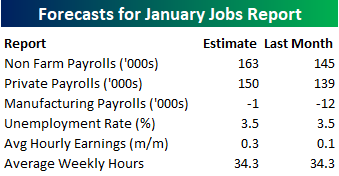 Ahead of the report, we just published our eleven-page preview of the January jobs report.  This report contains a ton of analysis related to how the equity market has historically reacted to the monthly jobs report, as well as how secondary employment-related indicators we track looked in January.  We also include a breakdown of how the initial reading for January typically comes in relative to expectations and how that ranks versus other months.

For anyone with more than a passing interest in how equities are impacted by economic data, this January employment report preview is a must-read.  To see the report, sign up for a monthly Bespoke Premium membership now!