It’s that time of year again.  The time when corporate America reports financial results for the prior three months.  Normally, we call it earnings season, but given the fact that most of the US economy has been shut down and no timetable is set for when it re-opens, for a lot of companies out there, there really isn’t much in the way of earnings, revenues, or guidance to speak of.  Instead, this reporting period will likely be a lot of companies trying to put the best spin on how much (or little) cash they have on hand to withstand the shutdown.

Besides the major banks and financials, there hasn’t been a whole lot in the way of reports to speak of, but of the results we have seen, the stock market reaction hasn’t been great as companies like Johnson & Johnson (JNJ), JP Morgan (JPM), Wells Fargo (WFC), Bank of America (BAC), and Goldman Sachs (GS) have all seen negative reactions to their reports.  The only large-cap that has really reacted positively to earnings so far is UnitedHealth (UNH) which gained more than 4%.  Next week, the pace of reports will pick up, but the peak period for reports won’t be for another two weeks when more than 300 companies will report in a single day.

Our quarterly preview of earnings season is extremely useful and a must-read.  To see the report, sign up for a monthly Bespoke Premium membership now! 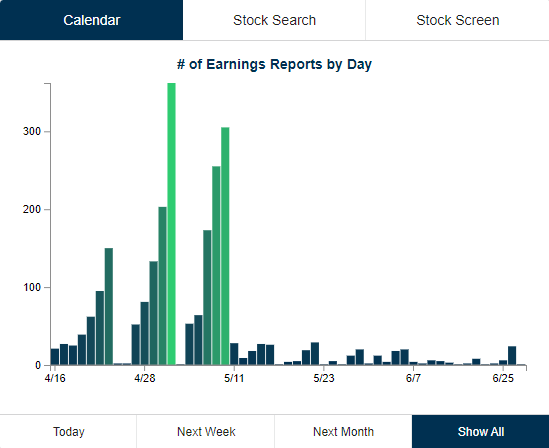