After a relatively quiet week for economic data and practically no earnings reports to speak of, the Q2 earnings season will kick off next week.  Normally, earnings season starts quietly with just a handful of reports outside of the major banks, but next week will be relatively busy with some major players on the calendar.  Things start off slowly with Pepsi (PEP) on Monday.  Tuesday, we’ll get reports from Citigroup (C), Delta (DAL), Fastenal (FAST), JP Morgan Chase (JPM) and Wells Fargo (WFC), all of whom are scheduled to report in the morning.  Wednesday’s major reports include Goldman (GS), Progressive (PGR), and UnitedHealth (UNH) in the morning, while Alcoa (AA) will report in the afternoon.  Thursday will be the busiest day of the week with too many stocks to list here, but Netflix (NFLX) will highlight the schedule of afternoon reports.  Finally, Friday’s key reports include Blackrock (BLK) and State Street (STT).

As far as analyst sentiment stands heading into the current earnings season, while we wouldn’t go so far as to say that it has made a full 180-degree turn from last quarter’s negative extremes, it has been close.  Over the last four weeks, analysts have raised forecasts for 580 companies in the S&P 1500 and lowered forecasts for 419.  That works out to a net of 161 or just under 11% of the index.  Besides the S&P 1500, six sectors have positive revisions spreads, while just two are negative.  Sectors with the most positive revisions spreads include Consumer Staples, Energy, and Technology, while the two sectors with negative spreads are Financials and Real Estate.  Financials just can’t find any love these days. 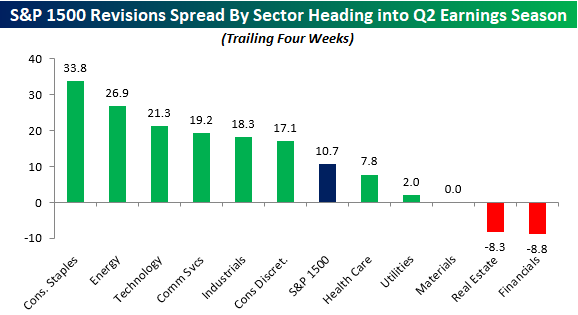