After several weeks where employment-related data was mixed relative to expectations, we’ve begun to see some signs of improvement as jobless claims have edged back down.  Even with that improvement, though, there have still been some mixed signals. Those mixed signals haven’t resulted in a lot of angst on the part of the market heading into the report, though.  That’s because recession fears mostly seem to be in the rearview mirror, and the Fed has basically taken itself out of the picture regarding any potential hikes.

Heading into tomorrow’s Non-Farm Payrolls report, economists are expecting an increase in payrolls of 160K, which would be a 106K decline from November’s blockbuster reading of 266K.  In the private sector, economists are expecting a similar decline from 254K down to 153K.  Job growth in the manufacturing sector is expected to decline from 54K down to 5K.  Even with the expected big decline in Non-Farm Payrolls, the Unemployment Rate is expected to stay unchanged at 3.5% while average hourly earnings are forecast to increase 0.3% compared to November’s reading of 34.4. 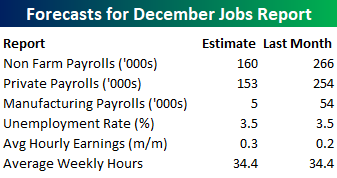 Ahead of the report, we just published our eleven-page preview of the December jobs report.  This report contains a ton of analysis related to how the equity market has historically reacted to the monthly jobs report, as well as how secondary employment-related indicators we track looked in December.  We also include a breakdown of how the initial reading for December typically comes in relative to expectations and how that ranks versus other months.

For anyone with more than a passing interest in how equities are impacted by economic data, this December employment report preview is a must-read.  To see the report, sign up for a monthly Bespoke Premium membership now!