For anyone unfamiliar with the 1969 Miracle Mets, the “Amazins” were 10 games out of first place as late as mid-August and then went on to win 38 out of their last 49 games to finish in first place over the Cubs. From there, the Mets went on to win the first World Series in the history of the franchise in what at the time was one of the biggest turnarounds in the history of baseball.  Ironically, in 2007, the Mets were on the other end of another historic turnaround after they blew a seven-game division lead with less than a month left in the season by losing 12 of their last 17 games. But that collapse is a story for another time.

Like the Miracle Mets in 1969, the Nasdaq 100 in 2020 has also staged a historic turnaround.  After trading up over 10% earlier in the year, the gains quickly evaporated with the COVID outbreak.  Within two months, the Nasdaq 100 went from a YTD gain of over 10% to a decline of over 20% by late March.  From there, though, the Nasdaq has gone on an epic run, not only erasing all of its losses but also trading to record highs and a gain of over 20% on the year. 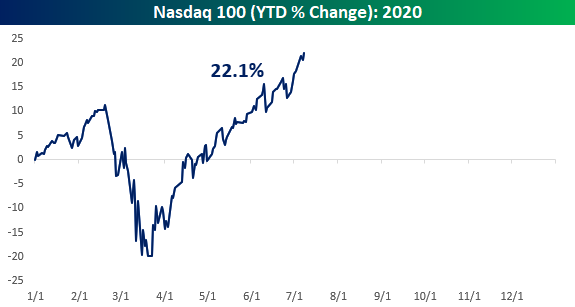 Obviously, the year is only a bit more than half over, so it’s far from a guarantee that the percentage of positive days will remain as elevated as it is now. To make an apples to apples comparison, in our most recent B.I.G. Tips report we looked at prior years where the Nasdaq 100 saw a similar consistency of daily gains to see how the rest of the year played out. To read the entire report login or start a two-week free trial to either Bespoke Premium or Bespoke Institutional.