Based on the latest Retail Sales report for January, it looks like the $600 stimulus checks that were sent out to both struggling (and non-struggling) Americans in later December and early January achieved their purpose.  After three straight weaker than expected reports, Retail Sales for the month of January blew the doors off estimates, surging by 5.3% compared to expectations for an increase of 1.1%.  After stripping out Autos and Gas, the increase was even more at close to 6%.

To put this spread versus expectations into perspective, since the late 1990s, the only other times that Retail Sales topped expectations by more than four percentage points were last June coming out of the lockdowns and back in November 2001 after the 9/11 attacks.  While December’s report was revised down, it did little to dent the positive impact of the January numbers.

Not surprisingly, breadth in this month’s report was perfect.  Of the thirteen sectors that comprise the total pie, all of them were higher on a m/m basis led by Electronics & Appliances, Furniture, and Online, which all spiked more than 10%.  If the distortions resulting from the COVID lockdowns weren’t so fresh in our collective memories, we’d be calling these types of moves historic.  On the downside, Health and Personal Care was the weakest sector, and it still increased over 1%! 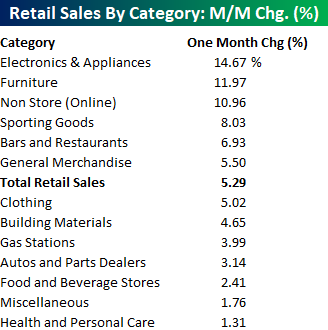 The characteristics behind the total level of sales have changed markedly in the post-COVID world.  In our just-released B.I.G. Tips report, we looked at these changing dynamics to highlight the groups that have been the biggest winners and losers from the shifts.  For anyone with more than a passing interest in how the COVID outbreak is impacting the economy, our monthly update on retail sales is a must-read.  To see the report, sign up for a monthly Bespoke Premium membership now!