After a couple of days of much stronger than expected inflation data, the trend of higher than expected readings didn’t continue with Friday’s Retail Sales report. While economists were expecting sales to increase by 1.0% versus March, the actual level was unchanged. After subtracting Autos and Gas, the report was even weaker showing a decline of 0.8%. While the April report was a disappointment, it wasn’t all bad; March’s report was revised higher by nearly the same amount that April’s report missed expectations by.

Since the outset of the COVID pandemic, there have really been some crazy swings in economic data.  One example is the total share of Retail Sales that Food & Beverage Stores account for.  Prior to COVID, the sector’s share of total sales had been slowly drifting lower over time in the low-double-digit percentage range.  The COVID lockdowns really changed that, though.  Over the course of a month from February to March 2020, the sector’s share of total sales spiked from just over 12% to more than 17%.  Obviously, Americans weren’t suddenly eating more (at least not that much more), but with the economy locked down, they literally couldn’t spend money on anything but the essentials like food, liquor, and lottery tickets.  Additionally, for the food they did eat, they were forced to buy it at the grocery store rather than at restaurants.

As the lockdowns ended and Americans were able to spend again, the sector’s share of total sales started to decline again.  While a reversion back down to its baseline level was expected, the sector now actually accounts for a lower percentage of total sales than it did before the pandemic!  Just as Americans weren’t necessarily eating more during the pandemic, they aren’t eating less now that the pandemic has ended.  The reason that the sector’s share of total sales has dropped below pre-pandemic levels is the exact opposite of why its share spiked so much during the pandemic.  Americans aren’t spending more or less on food now than they did before or during the pandemic, but instead, the pie is a lot larger now (thanks to savings and stimulus) and they are choosing to spend that food money at restaurants and takeout rather than at the grocery store. 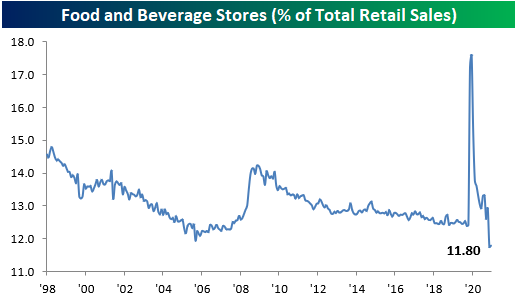 In our just-released B.I.G. Tips report, we broke out the details of the April report including its bright and dark spots. For anyone with more than a passing interest in how the COVID outbreak and subsequent stimulus is impacting the economy, our monthly update on retail sales is a must-read.  To see the report, sign up for a monthly Bespoke Premium membership now!