After months of being cooped up in their homes, Americans were once again out and spending in June. Retail Sales for the month of June were expected to rise by a strong 5%, but the actual reading came in much stronger at 7.5% on the headline reading and modestly less than that ex Autos and ex Autos and Gas. In addition to June’s strong headline number, May’s reading was also revised higher at the headline level but moved lower after taking out the impacts of Autos and Gas.

It’s no doubt been a whirlwind four months for retail sales.  After the two worst monthly reports in March and April, May and June have followed up with record m/m increases.  As shown in the chart, even though June’s reading of 7.5% seems like a pretty big step down from May’s record reading, it was still the second strongest  m/m change in the history of the report. 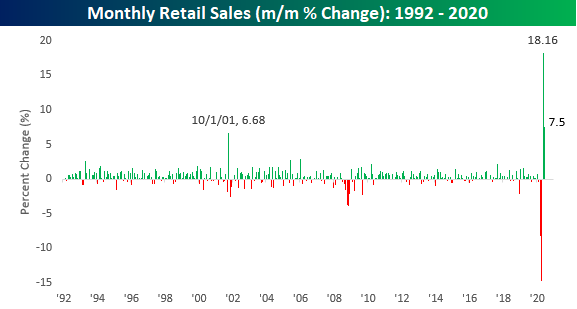 For anyone with more than a passing interest in how the COVID outbreak is impacting the economy, our monthly update on retail sales is a must-read.  To see the report, sign up for a monthly Bespoke Premium membership now!