Whether you want to look at it from the perspective of closing prices or intraday levels, the S&P 500 is doing what just about everybody thought would be impossible less than five months ago – approaching record highs.  Relative to its closing high of 3,386.15, the S&P 500 is just 0.27% lower, while it’s within half of a percent from its record intraday high of 3,393.52.  Through today, the S&P 500 has gone 120 trading days without a record high, and as shown in the chart below, the current streak is barely even visible when viewed in the perspective of all streaks since 1928.  Even if we zoom in on just the last five years, the current streak of 120 trading days only ranks as the fourth-longest streak without a new high.

While the S&P 500’s 120-trading day streak without a new high isn’t extreme by historical standards, the turnaround off the lows has been extraordinary.  In the S&P 500’s history, there have been ten prior declines of at least 20% from a record closing high.  Of those ten prior periods, the shortest gap between the original record high and the next one was 309 trading days, and the shortest gap between highs that had a pullback of at least 30% was 484 tradings days (or more than four times the current gap of 120 trading days). For all ten streaks without a record high, the median drought was 680 trading days. 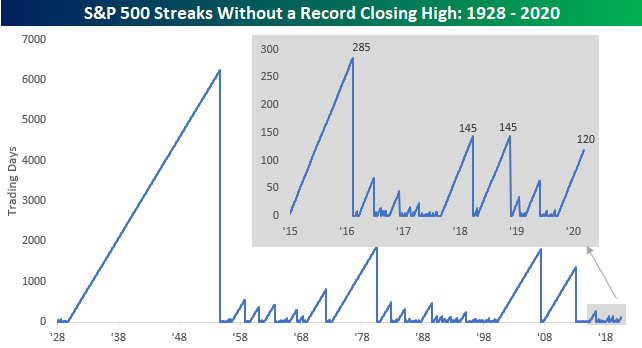 Whenever the S&P 500 does take out its 2/19 high, the question is whether the new high represents a breakout where the S&P 500 keeps rallying into evergreen territory, or does it run out of gas after finally reaching a new milestone?  To shed some light on this question, we looked at the S&P 500’s performance following each prior streak of similar duration without a new high.  To read the report, start a two-week free trial to Bespoke Premium today.