Heading into the fifth month of 2021, one thing for sure this year is that it has been a lot calmer than last year. The S&P 500 closed out April in the midst of one of its narrowest short-term trading ranges in months, and it occurred right in the thick of earnings season! Anyone who’s been disappointed with the price action so far this year either has too much cash or is just plain greedy. The 4,200 level has been a short-term area of resistance for the S&P 500, though, and while it’s broken above that level in early trading today, we would wait until the close of trading for confirmation of the breakout.

Every sector is up so far YTD, and they’re all above their 50-DMAs. Ironically, sectors that have lagged like Consumer Staples and Utilities are still both overbought, while Energy, the best performing sector YTD, is barely above its 50-DMA. Along with Technology, which was one of just two sectors down last week, the Energy sector’s timing score ranks as ‘Good’.

Market rallies are always fun if you’re long equities, but with many groups trading at or near 52-week highs, risk/reward isn’t necessarily as attractive. Even in overbought markets, though, there are always opportunities. 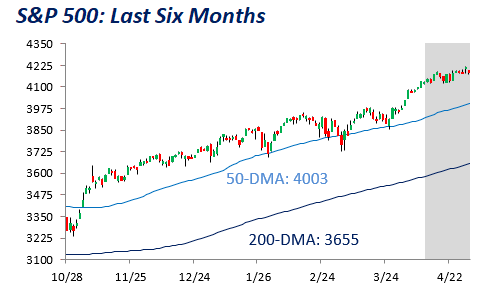 In our just-released B.I.G. Tips report, we’ve provided an update to our “Lay of the Land” report which summarizes the performance and chart patterns of every S&P 500 Industry over the last year. For anyone looking for a snapshot of where things stand from a technical perspective heading into the crucial month of May, this report is a must-read.  To see the report, sign up for a monthly Bespoke Premium membership now!