B.I.G. Tips — Decile Analysis of Act III and Beyond

As we’ve been highlighting over the past month or two, the rally off the March 23rd Covid Crash low has been a three act play.  In last Friday’s Bespoke Report, however, we noted that Act III may be coming to an end as we’ve started to see some rotation out of the areas that led the market for most of June and July.

During Act III that began on June 8th and looks to have ended on July 20th, the S&P 500 was almost exactly flat.  This came during a period of rising Covid case counts around the country that caused “re-open” stocks to fall significantly while Tech and “Covid Economy” stocks led.  Because some of the most notable “Covid Economy” stocks are also the biggest stocks in the world, these names helped prop up the cap-weighted S&P 500 during Act III.  Underneath the surface, however, the market was very weak during Act III with the average stock in the S&P falling 5.7%.  So Act III was essentially a “flat” pullback if you’re looking for a way to describe it at the index level. 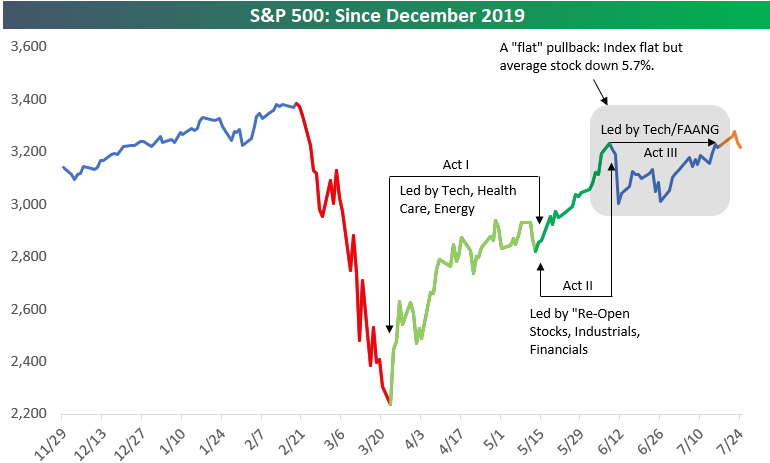 We can use our decile analysis to spot the differences between the action we saw during Act III from 6/8 to 7/20 and the action we’ve seen since 7/20.  Below is our decile analysis of the S&P 500 during Act III.  To run the analysis, we break the index into deciles (10 groups of 50 stocks each) based on the various stock characteristics shown in the matrix below.  We then calculate the average performance of the stocks in each decile from June 8th through July 20th.

Our decile analysis clearly shows that…