If you’ve been following the market this week, you’ve probably heard the ‘frustration’ on the part of investors and commentators regarding the equity market’s inability to rally this week on what can only be characterized as great earnings, especially from the Fab Five of Apple (AAPL), Alphabet (GOOGL), Amazon (AMZN), Facebook (FB), and Microsoft (MSFT).  Despite the tremendous results, the stocks didn’t necessarily perform uniformly well.  On a median basis, the five stocks were up 2.27%,, but both AAPL and MSFT were down over 2%.  Was it the greatest week for stocks? No.  Could it have been worse? Definitely.

Heading into the week, one of the main concerns for the market was whether we would be able to get through the week unscathed as the five largest companies, representing more than a 20% of the entire S&P 500’s market cap, were all on the earnings calendar.  Over the last ten years, there have only been four other weeks where all five companies reported in the same week, and all of them were tough for the broader market with weekly declines ranging from a loss of 0.21% in the week ending 5/1/20 to a decline of 5.64% in the last week of October.  This week, the S&P 500 was only up 0.05%, but we’re not complaining.

In the case of AAPL, we heard a number of ‘analysts’ claim that the reason for its decline was that the results were too good.  Really?  By that logic, does it mean that if Apple missed estimates and guided lower, the stock would have traded higher? Come on.  Markets and stocks are a two-way street.  Sometimes they go up and sometimes they go down. Don’t’ get greedy.

As usual, this week’s Bespoke Report covers the major forces that are driving equity markets right now.  To read the report and access everything else Bespoke’s research platform has to offer, start a two-week free trial to one of our three membership levels.  You won’t be disappointed! 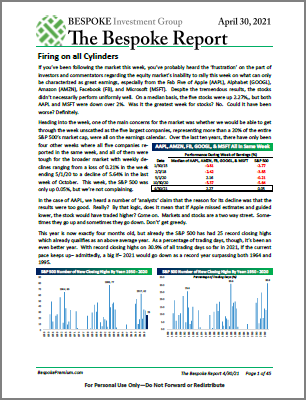