The Bespoke Report – Was It Something I Said?

This week’s Bespoke Report newsletter is now available for members.  Well, it was looking like a positive week.  After two strong days for the S&P 500, Wednesday was looking like a third positive day as the equity market was poised to put the sharp declines of the first two weeks of September behind it.  All we had to do Wednesday was get through the Fed at 2 PM, and then it would be smooth sailing.  When the Fed released its statement at 2 PM Wednesday, the market initially rallied.  So far, so good.  But then Chairman Powell stepped up to the podium.  True to form, within 15 minutes of the start of Powell’s press conference, the S&P 500 made its high for the day and ultimately the week.  By Friday, any hopes for gains this week were a distant memory.

Chairman Powell may go down as the scapegoat for this week’s sell-off, but there was nothing really new in the Fed’s statement.  Some have suggested that the Fed wasn’t dovish enough in its comments, but that’s a bit of a stretch. We would put more weight on the fact that the calendar says September than anything the FOMC said.

We just published our weekly Bespoke Report newsletter, which covers all of the major events of the week, including the economy, sentiment, and the Covid outbreak.  To read the report and access everything else Bespoke’s research platform has to offer, start a two-week free trial to one of our three membership levels.  You won’t be disappointed! 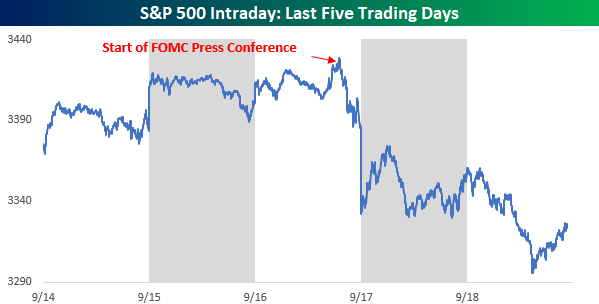