The Bespoke Report – Trick or T(h)reat

Talk about a Halloween scare. In a week where the S&P 500 has historically risen 1%, it traded down more than 5% which was its worst one-week performance since the COVID crisis. Even more notable was the fact that it was the worst performance for the S&P 500 in the last full week before a Presidential election on record. At the close on Friday, the S&P 500’s week-to-date decline was nearly twice the decline of the second-worst week in 1932 when the S&P dropped 2.96% in the last full week leading up to the 1932 election of FDR!

It was a very busy week for the market with a traffic jam of worries to contend with. In this week’s Bespoke Report, we give a full recap of everything going on this week and what it means going forward. 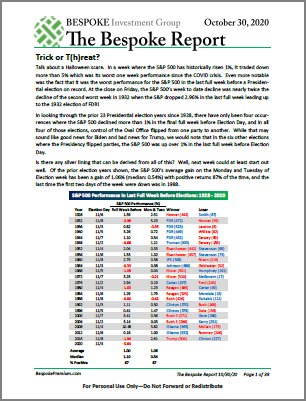 To read this week’s report and access everything else Bespoke’s research platform has to offer, start a two-week free trial to one of our three membership levels.  You won’t be disappointed!