The Bespoke Report – Slip But No Slide (Yet)

For a lot of kids (and some adults) one of their favorite outdoor activities is the ‘slip and slide’, especially the homemade ones made from large plastic tarps. There’s nothing like turning on the hose on a hot summer day and running headfirst down a long plastic sheet covered with cold water to cool off. Looking at the market this week, we saw some signs that it was starting to slip, but hopefully, at this point, it doesn’t turn into a slide.

The S&P 500 started off the week with its 39th record high of the year, which already ranks as the 12th most for a given year since WWII. The next four days weren’t nearly as positive, though, as the S&P 500 declined in three out of the four next days while the Nasdaq and Russell 2000 both headed into the weekend riding four-day losing streaks.

Where to from here? As always, there’s a number of positives and negatives within the market, and in this week’s Bespoke Report we cover a wide range of them. To read the report and access everything else Bespoke’s research platform has to offer, start a two-week free trial to one of our three membership levels. 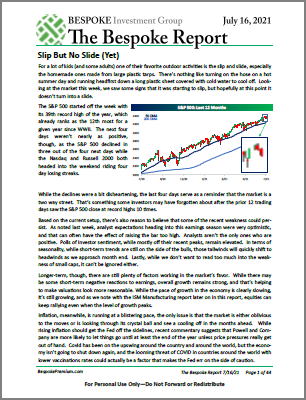