We got a major October surprise to close the week, and it really does feel more like silly season than a surprise. We discuss the implications of the President’s positive COVID test for both markets and the election. Speaking of November’s election, we break down the outlook based on national polling, discuss the Senate and why a split Congress might be a disaster for the prospects of fiscal stimulus, and the growing evidence (including insistence from FOMC officials) that more easing is necessary. That evidence includes this week’s jobs report and the personal income and spending numbers released earlier in the week, both of which we discuss in detail. Seasonality, international markets, co in this week’s Bespoke Report. 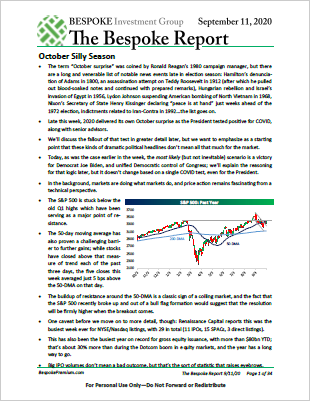