With the peak of earnings season ahead, including reports from the five largest companies in the S&P 500 (at the time), investors were looking at quite a hill to climb heading into this week. Based on past precedent, expectations weren’t great. In the past, when the five FAAMG stocks (Facebook, Apple, Amazon, Microsoft, and Alphabet) have reported earnings in the same week, their performance and the performance of the S&P 500 during that week has generally been poor. In the five prior occurrences where this occurred since 2015, the S&P 500 was down during that week four out of five times, and the only positive return was a modest gain of 0.14% in the week ending 4/30/21.

This week came and went, and the bulls were unfazed by the challenge. Despite mixed reports from the companies reporting– three of which were down on their earnings reaction days– the S&P 500 managed to rally more than 1% and hit record intraday highs on four of the week’s five trading days.

In this week’s Bespoke Report, we discuss all the issues impacting the market this week along with what to expect in the final two months of the year. To read this week’s full Bespoke Report newsletter and access everything else Bespoke’s research platform has to offer, start a two-week trial to one of our three membership levels. 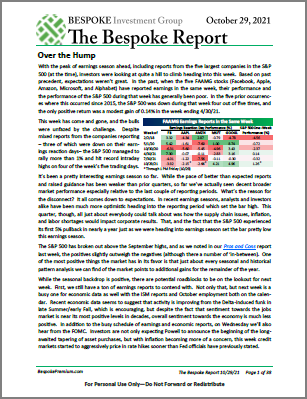