The market may abhor uncertainty, but even with an abundance of it, US equities had their best week in months.  The health of the President, the progression of COVID, the ultimate outcome of the election, and the status of another round of stimulus are just a few of the issues facing investors right now, but this week the market was able to grin and bear it and push higher.

That wasn’t necessarily the case on Tuesday, though.  What was looking like a good day for equities abruptly headed south after the President put the kibosh on hope for a stimulus deal when he tweeted that he had instructed “representatives to stop negotiating until after the election when, immediately after I win.” With that, the S&P 500 erased a 0.5% intraday gain and finished the day down over 1%.   While the reversal was scary to watch, as we noted in our Morning Lineup on Wednesday, “while it’s often tempting to read into these types of late-day sell-offs as an early ‘tell’ for further market weakness, the summary results don’t bear that out.”  By the close on Wednesday, the S&P 500 had erased all of Tuesday’s losses, only adding to those gains on Thursday and Friday. 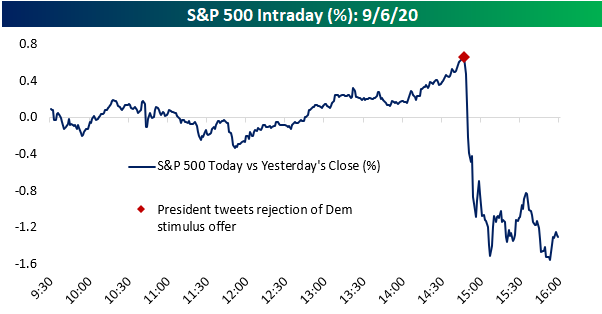 Part of the reason for the recovery in equity prices was the fact that President Trump backtracked on his comments from Tuesday, and by Friday was tweeting and telling Rush Limbaugh that he wanted to “Go Big” with an even larger stimulus bill than the Democrats were proposing!

Where these stimulus talks end up is anyone’s guess, and we’re not sure anything even gets done, but there’s also a lot more to cover in the markets this week.  We just published our weekly Bespoke Report newsletter, which covers all of the major events of the week, including the economy, sentiment, the Covid outbreak, key group performance, and the upcoming earnings season.  To read the report and access everything else Bespoke’s research platform has to offer, start a two-week free trial to one of our three membership levels.  You won’t be disappointed!