Fourteen years ago this week, the series finale (Made in America) aired for what many critics believe is the greatest television show in history — The Sopranos.  The show, which was as much a critique of American culture as it was a mob story, ended with the Soprano family gathering for dinner in a New Jersey diner while Journey’s  Don’t Stop Believin’ played.

Seeing the 14-year anniversary of Made in America got us thinking back to those days in spring 2007, because that’s right around the time when we launched Bespoke.  Once we opened our doors, only a few months would pass before the Financial Crisis hit, upending the financial industry for a good 18-24 months.  Yet Bespoke made it through, and we are forever thankful for those early clients (many of which are still with us) that signed up to read our reports like this one, the Bespoke Report newsletter.  We don’t have an exact count, but based on 14 years of weekly publications, we should be at well over 600 releases by now!

There was not a lot going on in financial markets this week as the economic calendar was light and we’re right in the middle of the earnings off-season.  US markets have been very calm since Memorial Day which is typical for this time of year.  This week we saw minimal moves for the S&P 500.  Monday saw a decline of 8 basis points, Tuesday saw a gain of 2 basis points, Wednesday saw a drop of 18 basis points, and on Thursday the index gained just under half a percent.  We closed out the week on Friday with another small gain of 20 basis points.

Even though it was a slow week, there’s always plenty for us to cover, and we do so in this week’s Bespoke Report.  Enjoy this week’s report, and have a great weekend.  We’re now 10 days away from the longest day of the year, so take advantage of the nice weather and extended daylight while we have it!

To read the Bespoke Report and access everything else Bespoke’s research platform has to offer, start a two-week free trial to one of our three membership levels. 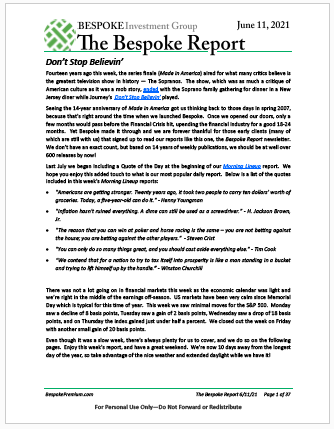