Labor Day marks the unofficial end of summer and the beginning of a new school year. Right now, there are thousands of 18-year-olds starting their first year of college around the country, and many of them have been dropped off in an environment they’ve never experienced. As they try to figure it all out, they’re going to make a lot of mistakes along the way. Everybody does.

Heading into the last four months of 2022, the Fed and everybody else are like first-year college students. We’ve never experienced anything like the current backdrop before. While we want to think that Jay from New York down the hall, Esther from Kansas City, or Jim from St. Louis somehow have all the answers, they, like everybody else, have no clue either. It’s not just the Fed. Everybody has been wrong more often than they’ve been right since COVID.

After having just told you how everyone has been wrong on everything for the last two years, you may be thinking to yourself, what do they know that everyone else doesn’t? We don’t have a crystal ball either. Our approach now is the same as it always has been and that’s to listen to what the market is saying, and in this week’s Bespoke Report, we cover all of the week’s major market events and how they may impact the market.  To read this week’s full Bespoke Report newsletter and access everything else Bespoke’s research platform has to offer, start a two-week trial to one of our three membership levels. 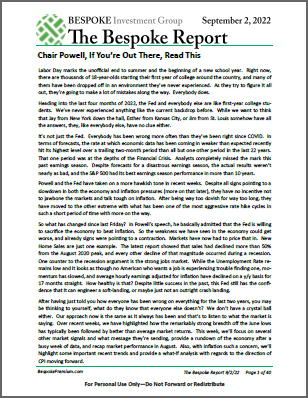