After a strong jobs report last Friday reignited fears of an overheating economy, markets were edgy heading into a busy week for inflation data.  It doesn’t happen that often, but bulls hit the inflation superfecta.  It started with Monday’s release of the July Survey of Consumer Expectations which showed a continued decline in inflation expectations.  On Wednesday, the big bad CPI report for July was released and that came in lower than expected for a change.  The weaker-than-expected CPI was followed by a weaker PPI Thursday and then a weaker-than-expected report on Import Prices Friday.  After months where it seemed as though every inflation report was coming in hot, this week’s data on prices was cold, cold, cold, and cold.  The heatwave has been broken!

Well, we don’t know if the inflation heatwave has actually been broken or not, but we discuss all of this week’s inflation news and other major issues impacting the market in this week’s Bespoke Report. 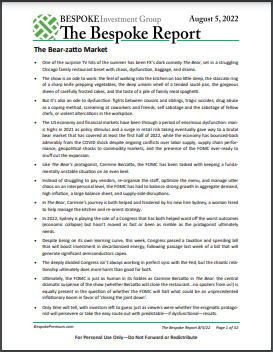