After a bounce in the second half of March that surprised just about everyone watching, the last two trading days of Q1 and the first trading day of Q2 have called into question whether or not the rally was the real thing. On the positive side, the gains that stalled out earlier this week pushed the S&P 500 back above its 50 and 200-day moving averages as well as the highs from early February forming a higher high in the process. On the negative side, the highs from February didn’t hold for long as Thursday’s waterfall decline to close out the quarter took the S&P 500 back below those levels.

Friday started off with some gains, but sellers quickly took control as equities weakened throughout the day before some stabilization into the close. While the February highs are overhead resistance again, bulls will be closely watching the major moving averages for signs of support. This week’s declines haven’t been enough yet to cause bulls to lose hope, but it won’t be a worry-free weekend either. 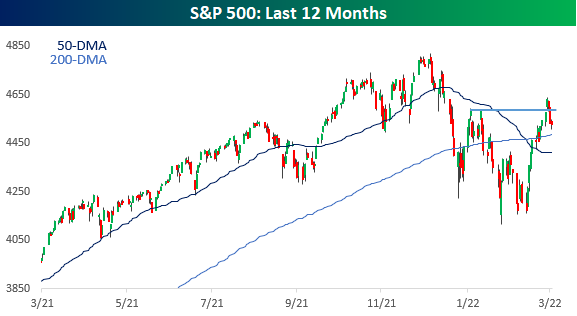 With the beginning of a new quarter, markets are in a bit of a limbo period as investors await what is likely to be a volatile earnings season, but there was still a lot to cover this week. There’s not enough time (or computer memory) to cover everything that transpired this week, but we tried to cover some of the most pressing macro issues.  Make sure to check it all out in this week’s Bespoke Report. 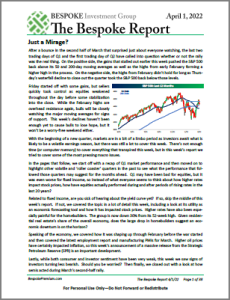