For anyone whose investing experience begins with the COVID lockdowns, nobody told them there’d be days like we’ve seen in 2022 where the market not only goes down some days but goes down more often than it goes up! As the next line of the Lennon song goes, “strange days indeed.” Yoko Ono once said in an interview that the impetus for John Lennon writing “Nobody Told Me” was that he thought the world had lost its course. These days, the world probably lost its way in the early days of COVID, but the market lost its course late last year. Besides Energy this year, nothing has worked for investors. A company can have all the growth in the world, but if the earnings aren’t there good luck. Bonds, which usually provide some level of support during a market sell-off, have done just as bad as equities.

Heading into this weekend, we have to say we’re feeling a little bit of déjà vu. In last Friday’s report, we wrote that “on Friday [2/11] geopolitical concerns crowded out the FOMC and inflation when reports surfaced that a Russian attack on Ukraine was imminent” with an attack likely coming on February 16th. February 16th came and went with no attack, but markets still remain on edge regarding Ukraine. Once again this Friday, the Wall Street Journal sparked an intraday sell-off with the headline “US Warns of Imminent Russian Invasion of Ukraine With Tanks, Jets, Cyberattacks”.  At some point, these headlines may be correct, but maybe, just maybe, by the time the attack actually comes, we’ll be numb to the headlines.

In this week’s Bespoke Report we cover all the major events of the week and also provided an analysis of how the current period compares to historical market corrections and bear markets.  To read this week’s full Bespoke Report and access everything else Bespoke’s research platform has to offer, start a two-week trial to one of our three membership levels. 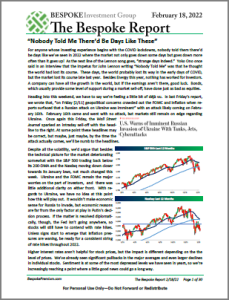