If you thought things were going to calm down after the midterms, think again. No later than two days after Americans voted, financial assets of all types had what were some of the most extreme moves in years. On Thursday, the 10-year US Treasury yield had the 17th most extreme downside move (normalized to the last 200 trading days) since 1980. The S&P 500 had the 15th largest one day rally since 1980, and the US Dollar Index had its 9th largest daily decline over that same span. Investors have been through a lot over the last several years, but Thursday ranked right up there with all of them, and we’re not even including the ‘you-know-what’ show that’s been going on at Twitter! All we can say is that thankfully the moves in stocks and bonds were up rather than down.

There wasn’t a lot of data this week, but it was still full of fireworks rivaling any grand finale.  To read this week’s full Bespoke Report newsletter and access everything else Bespoke’s research platform has to offer, start a two-week trial to one of our three membership levels. 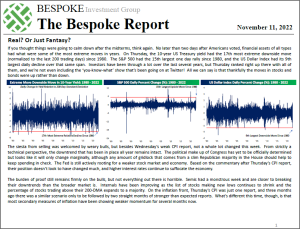