If you thought the new year was going to mark a turning point from all the craziness of 2020, think again.  In the equity market, the year couldn’t have started out any worse.  It was only five trading days ago, but we wouldn’t excuse you for forgetting what happened on Monday given all the events in between.  So here’s a recap.

The year started off innocent enough on Monday morning.  Futures were firmly higher, and the S&P 500 opened in positive territory.  Within minutes, though, traders began to ring the register locking in gains from 2020 and deferring the taxes from those winnings until the end of the year. Within the first 90 minutes of trading the S&P 500 was down over 1%, and by noon it was down more than 2%.  Things started to stabilize in the afternoon, but at the end of the day, the S&P 500 was still down about 1.5%. 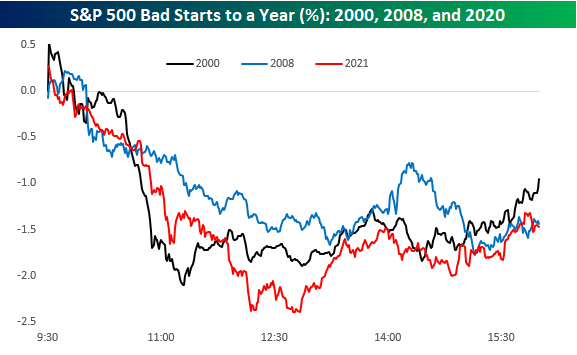 A 1.5% decline is nothing extreme in terms of market moves, but in looking through our intraday database going back to 1983, only two other years started out in positive territory at the opening bell only to finish the day down more than 1%.  Those two years were 2000 and 2008.  Even if you’re new to the market, you probably know how those two years played out.

Thankfully, the rest of the week looked nothing like what transpired in 2000 and 2008.  In both of those years, the S&P 500 continued declining throughout the week, but this year the market came back strong.  Even in the midst of Tuesday’s Georgia Senate run-off, Wednesday’s riots at the Capitol, and Friday’s much weaker than expected non-farm payrolls report, equities glided higher.

While the market’s rally against the backdrop of this week’s news events seems detached from reality, sometimes all you need to remember is that just as markets sometimes inexplicably decline during bear markets, there’s no taming bull markets either. 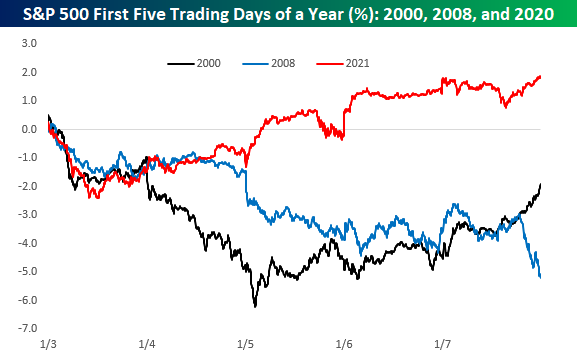 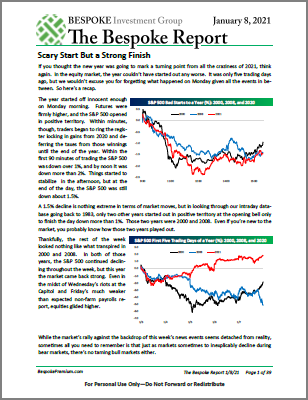