Zoom Video Communications (ZM) is the talk of the town today after reporting a triple play after the close last night.  ZM reported EPS and guidance more than double estimates and revenues one third higher than forecasts.  In response to the blowout quarter, the stock has surged over 38% in today’s trading.  That is the best single day for the stock since it IPO’ed back in April of last year. 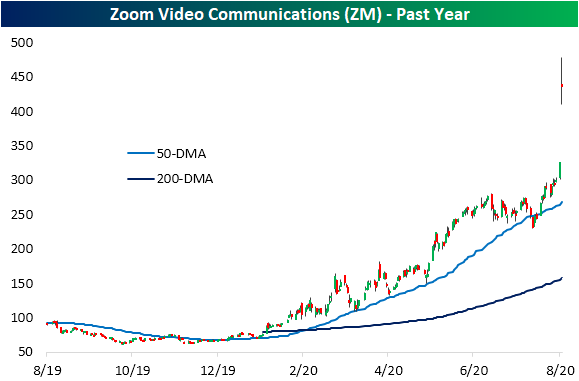 Using data from our Earnings Explorer, in the table below we show the 25 stocks that have seen the biggest positive price reactions to second-quarter results this year.  As shown, ZM’s massive surge of buying today leaves it as the fifth best performing stock behind Brightcove (BCOV), Groupon (GRPN), Tupperware (TUP), and Conduent (CNDT).  CNDT saw the biggest one-day gain on earnings of these when it rose over 82% on August 7th. One notable difference between ZM and the other top 5 best performers is intraday performance.  Whereas ZM has only risen around 2.5% intraday, TUP, GRPN, and BCOV all rose double digits from open to close, and while it did not rise double digits, even CNDT saw much stronger performance intraday.  Of the top 25 best reactions to earnings, in addition to ZM, there were only two other triple plays (EPS and sales beat plus raised guidance): Aspen Tech (AZPN) and Boston Beer (SAM).

Not only does ZM find itself on a “best of” list in terms of reactions to earnings, but with the massive boost from today’s performance, ZM has now overtaken Tesla (TSLA) as the best performing Nasdaq 100 stock in 2020.  In the table below we show the top-performing quarter of the index YTD through today. As shown, the COVID economy staple tops the chart with an over 540% gain compared to the runner up — Tesla (TSLA). In terms of market cap, ZM is now the 28th largest stock in the index having added roughly $72.9 billion year to date. For comparison’s sake, that is roughly $0.5 billion less than the current value of Goldman Sachs (GS). Given these massive moves, the stock is very much trading at a premium (which we discussed in more depth in today’s Morning Lineup) and is very elevated versus its moving averages. ZM is currently 65% above its 50-DMA and 174.64% above its 200-DMA.  The only comparable overbought stock in the index at the moment is TSLA.  Click here to view Bespoke’s premium membership options for our best research available. 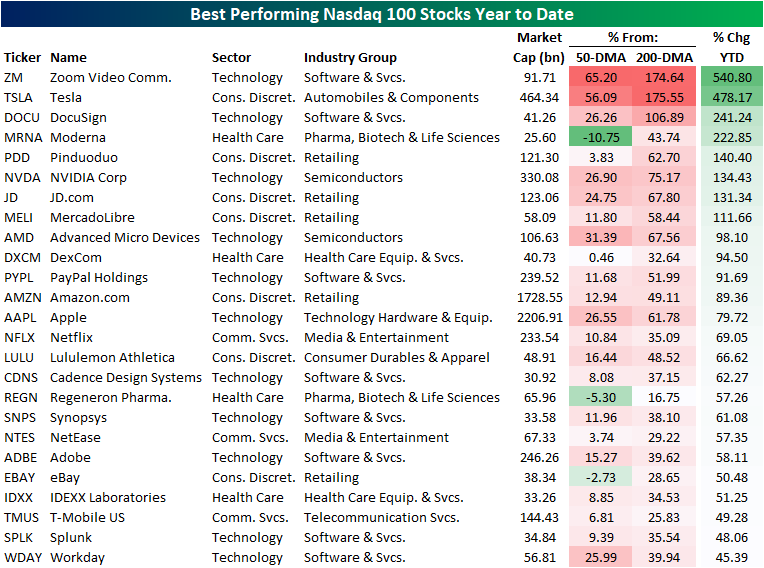