Worst Stocks of the Decade

While there have been a lot of big winners in the stock market in the past decade, there have been a number of big losers as well.  The table below lists the 15 stocks that are down the most over the last decade but still haven’t been booted from the S&P 1500.  The worst performing stock on the list is Frontier Communications (FTR) which is down over 99%!  At the end of the last decade, FTR was a $117 stock, but in the span of ten years has managed to shed over $116 of that share price!  After FTR, nearly all of the biggest losers are from the same sector.  You guessed it!  Energy.  The only non-Energy stocks shown are JC Penney (JCP) and Acordia Therapeutics (ACOR).

What’s really unbelievable about the fact that the remaining twelve stocks on the list are from the Energy sector is that there are just 89 stocks in the S&P 1500 Energy sector.  In other words, one out of every eight stocks in the sector is down 90% over the last decade.  Who would have thought ten years ago that in the early stages of an Energy revolution in the United States and one of the longest bull markets in stock market history that so many stocks in the Energy sector would lose nearly all of their market value.  It wouldn’t be the stock market if it didn’t surprise as many people as possible! Click here to join Bespoke Premium with a special offer and gain access to our full 2020 Outlook report. 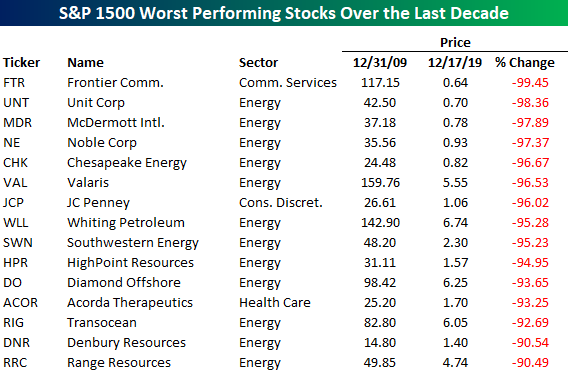