Who Is Now Overbought?

Over the past couple of weeks, as equities have mean reverted, the vast majority of S&P 500 stocks have moved out of oversold territory. In fact, today there are just two stocks that are oversold: Everest (RE) and Southwest Airlines (LUV).  Meanwhile, more and more stocks have gotten extended above their 50-DMAs.  At the moment, there are around 16% of stocks in the S&P 500 that are overbought.  That is certainly not a large amount of the index, but it is the most we have seen in some time now. 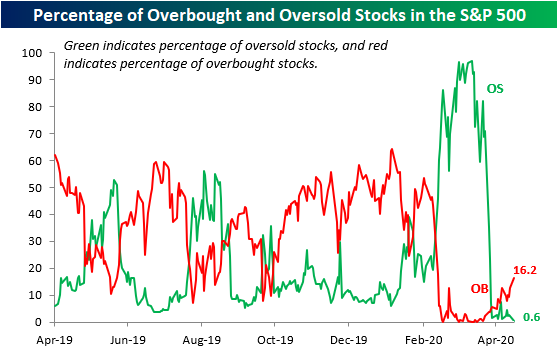 Taking a look across the stocks that are currently overbought, very few of them were those that had gotten hit the hardest from the February 19th peak to the March 23rd low.  In fact, of the 100 worst performing S&P 500 stocks in that period, there is only one that is overbought, Truist Financial (TFC), and there are only twelve (including TFC) that have retaken their 50-DMAs. Currently, the median distance from the 50-DMA of those 100 worst performers from 2/19 through 3/23 is 9.31% below their 50-DMA. In other words, the hardest hit stocks during the worst of the sell off have still yet to completely mean revert (more specifically, move back to their 50-day average).

As for the stocks that have mean reverted and are now looking a bit extended (at least 1 standard deviation above their 50-DMAs), most were of the better performing half of the S&P 500.  In the table below, we show the 40 names that were hit the hardest during the sell off from 2/19 through 3/23 out of the 77 S&P 500 stocks that are currently overbought.  While these are the worst hit of the currently overbought stocks, most of these were actually some of the strongest performers of the broader S&P 500 during the sell off though that does not mean they were totally immune from massive declines. For example, 17 of these stocks were in the top 100 best performers during the sell off. On the other hand, only three stocks, Truist Financial (TFC), Hologic (HOLX), and Humana (HUM) were in the bottom performing half of the index during the sell off.  The massive rebounds that these names have staged has led them to their current overbought levels.  Overall, due to the size of the massive declines in February and March, the hardest hit stocks in the S&P 500 have rallied considerably but have not yet reached overbought territory so much as even retaken their 50-DMAs.  That means that many of the least hard hit stocks are the ones that have first reached and are currently sitting in overbought territory. Start a two-week free trial to Bespoke Institutional to access our full range of research and much more. 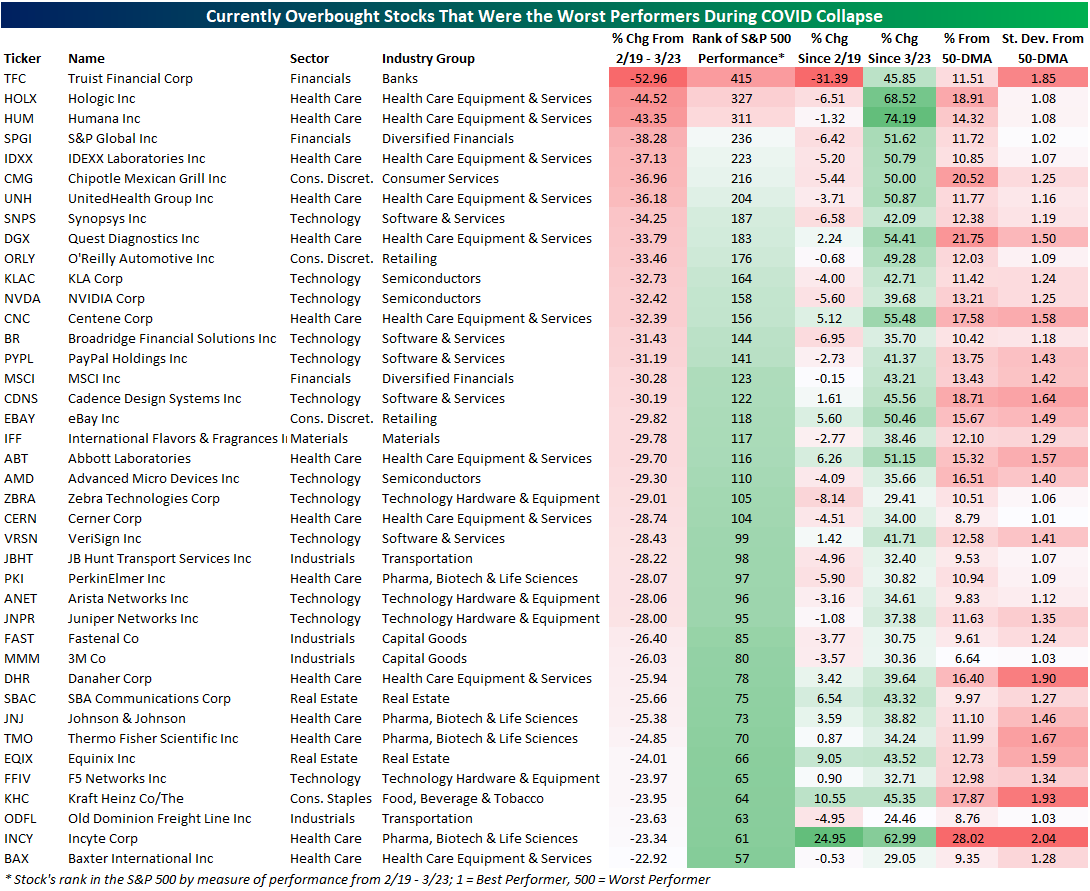