Which Industry Groups Bounced the Most Today?

It was a strong day on Wall Street as every industry group finished the day higher with many posting big gains on the session.  Consumer Services and Automobiles & Components both rose double digits with Consumer Durables & Apparel and the Semis not far behind.  Despite that large rally, the auto industry is the group that is currently furthest from its levels on the 2/19 high and is posting the largest YTD loss.  Its performance is even slightly worse than that of Energy which was the biggest loser during the worst of the sell off.

Contrary to the strong performance for autos today, Energy, which fell over 50% from the February 19th peak to the March 23rd bottom, rose about the same amount as the Food & Staples Retailers which only fell 11.4% during the sell-off and remains the closest industry group to its 2/19 levels.  Since the market bottomed on March 23rd, the Energy sector has risen the most at 33.17%. Even with that rally, it is down the second most (47.19%) year to date. Start a two-week free trial to Bespoke Institutional to access all of our research and interactive tools. 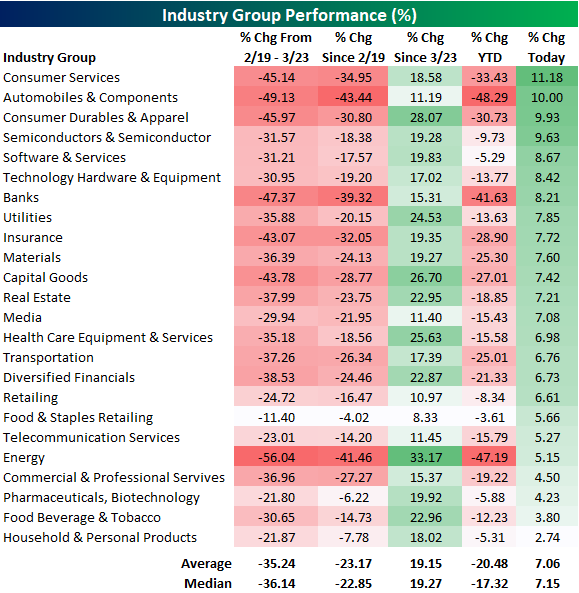