That seems to be a question a lot of people are asking lately.  Warren Buffett surprised a lot of investors this past weekend by disclosing that he was a net seller of equities in April after liquidating all of Berkshire Hathaway’s (BRK/a) stakes in the major airlines. Declines like the one we saw in February and March have typically been used by Buffett as an opportunity to add to Berkshire’s equity exposure, and over the last couple of weeks, everyone has been wondering what positions Buffett may have added to or even initiated during the sell-off.  Therefore, the news that Buffett actually added cash to his $100 billion war chest was surprising.  The fact that Buffett became even more conservative after Berkshire reported a quarterly loss of nearly $50 billion has the stock underperforming with a decline of over 3% today.

Even before the weekend’s events, shares of BRK/a have been underperforming the S&P 500 by a wide margin, and while it’s not particularly uncommon for BRK/a to underperform when the equity market is doing well, investors will usually tolerate that underperformance knowing that the stock will outperform in a bear market.  The only problem this time around is that even with the S&P 500 moving into (and out of) bear market territory in the last several weeks, the stock is still lagging the broader market in a big way.

Berkshire has been doing so bad lately that after today’s weakness, the stock’s relative strength versus the S&P 500 is at a five-year low.  Going all the way back to 1980, there has only been one other period where the Oracle of Omaha’s stock has seen its relative strength versus the S&P 500 drop to a five year low, and that was in late 1999/early 2000.  In fact, the title of this post has nothing to do with the present period as it’s actually a headline from an article in the Wall Street Journal from 12/27/1999.

As shown in the above chart, the one and only other time that Berkshire’s relative strength hit a five-year low, it didn’t stay low for long.  Below, instead of showing the relative strength, we show Berkshire’s price in the five years before and after that period.  From 1995 right up until early 1998, Berkshire’s stock did very well, but as the tech bubble began to inflate, the stock ran out of steam.  While Berkshire made a run at new highs in early 1999, it couldn’t quite get there, and from there the stock was nearly cut in half in the span of a year.  From there, though, Berkshire rebounded quickly even as the rest of the market started to fall apart and shareholders who held on made out well. 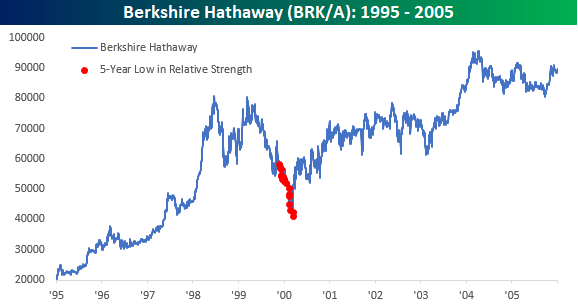 Fast-forwarding twenty years to today, the pattern for Berkshire has some similarities to the period leading up to 2000.  Like the late 1990s, Berkshire was essentially range-bound in the last couple of years leading up to the recent decline, but unlike 1999 when the stock failed to make a higher high, Berkshire hit a new high right along with the S&P 500 earlier this year.  Now that the stock has fallen and underperformed so sharply, questions surrounding Buffett and whether he has lost his touch are making the rounds.  History has shown that it has never been profitable to bet against Warren Buffett in the past, so that would make now look like an opportune time to be in the stock.  The only caveat here is time.  The last time people were questioning whether Berkshire was worth holding for the long-term, Buffett was just 69 years old.  This time around he’s less than four months away from his 90th birthday.  Definitely a young 90, but 90 nonetheless.  Start a two-week free trial to Bespoke Institutional for full access to our research and interactive tools. 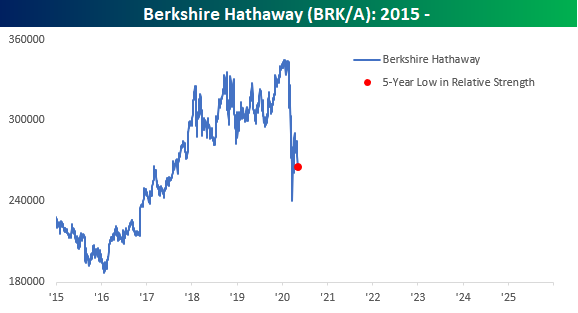