As we noted in an earlier post, the pandemic trends of tight labor markets and high inflation continue to show up in the latest NFIB survey of small business optimism, albeit readings have begun to roll over.  The survey also questions firms on what they perceive to be their most pressing problems.  Perhaps even more than the other indices in the report, the results of these questions have shown how front and center labor and inflation concerns continue to be.

As shown below, most problems have seen record or near-record lows. Meanwhile, two-thirds of responses report either cost or quality of labor or inflation as their biggest problem.

At 33%, inflation as the single most important problem has well surpassed the previous record high set during what was a much less dramatic inflationary spell in 2008.  Although this reading rose 3 percentage points versus September, it is in the middle of the past few months’ range. In other words, inflation is slightly less of a concern than it was a few months ago (which is confirmed by the decline in the higher prices index), but that is certainly not to say it is no longer the single most pressing problem. 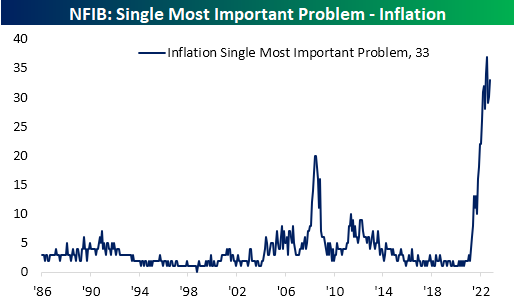 Another third of responses reported either cost or quality of labor as their biggest issues.  Quality is the bigger concern of the two—which is normal from a historical perspective—accounting for a 23% share. 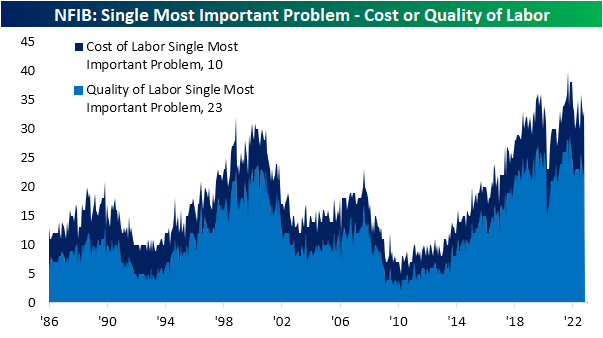 As we frequently note, the NFIB survey has a tendency to be impacted by politics with a bias towards Republican administrations.  For example, during the Bush and Trump years, there was a far lower share of respondents reporting government requirements and taxes as their biggest concerns. With the prominence of inflation, Biden’s tenure has resulted in a different scenario in which these issues have been placed on the back burner. Granted, these issues still account for the most pressing problem of a combined 17% of responses. We would also note, these readings have seen some dramatic moves around midterm election months, but those have not always been lasting. 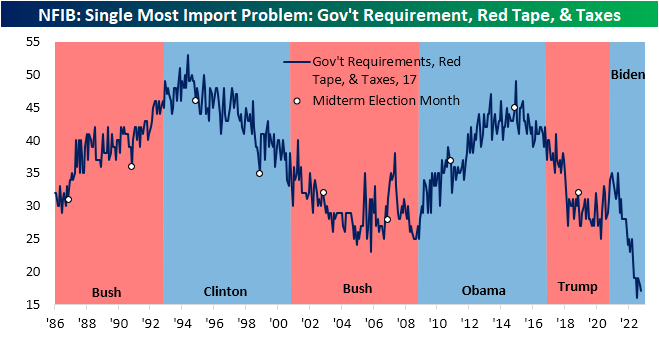 Finally, we would note that very few businesses (only 3%) are worried about poor sales.  That is a record-low share and unchanged for the third month in a row.  As we noted in our discussion of the other areas of the report, that lack of concern for the top line contrasts with businesses’ hopes for expansion and the outlook for the economy. In fact, of the reasons given for firms reporting now as not a good time to expand, sales prospects were the least pressing reason given. Click here to learn more about Bespoke’s premium stock market research service. 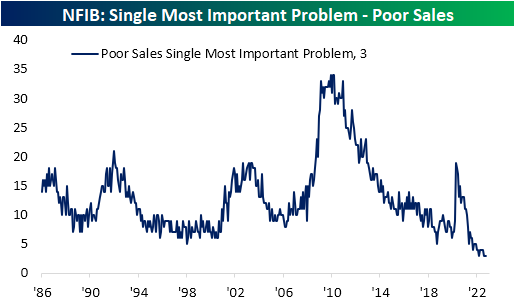