What is a 200-Day Moving Average Again?

If we’ve learned anything over the last two trading days after what seemed like a one-way move higher for the S&P 500, it is that equities can also go down.  Even after the declines of the last couple of days, though, the S&P 500 still remains close to 4% above its 50-day moving average (DMA) and more than 10% above its 200-DMA.  While there have been a handful of days since the COVID lows where the S&P 500 has dipped below its 50-DMA, there hasn’t been a single day since last June where the S&P 500 came even close to testing its 200-DMA.  We’re only in late April now, but as long as the S&P 500 doesn’t see a significant fall in the next two months, it has the potential to go a full year without closing below its 200-DMA.  When the 200-DMA does finally come into play again, many investors may not recognize what it is. 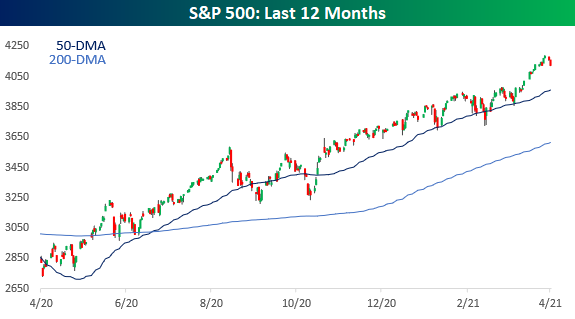 The chart below shows the percentage of time over a rolling one-year period that the S&P 500 traded above its 200-DMA.  At 89% now, the current level is hardly remarkable by historical standards.  Right before the COVID crash last year, the percentage reached as high as 97.6%, and three years ago in March 2018, it was up at 100%. What is remarkable about the chart, though, is how elevated this moving average has been for so long.  The last time it was below 50% was back in December 2009!

It’s easy to tell by looking at the chart, but thanks to short and swift pullbacks in the post-financial crisis period, this current streak without a sub-50% reading is the longest on record.  To put a little more meat on the example, after the current streak of nearly 11.5 years, the next longest streak stretched over a period of just under ten years spanning from April 1991 through March 2001 while the one behind that was less than five years (ending in May 2008).  And you only thought the market had been defying gravity recently!  Click here to view Bespoke’s premium membership options for our best research available. 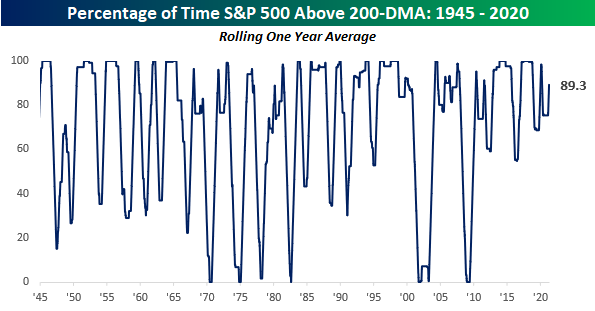