What a Way to Start the Weekend

If you’ve been in a particularly bad mood heading into weekends this year, you’re obviously paying pretty close attention to the markets.  With today’s decline, the S&P 500 is in the familiar position of ending the week with a decline of 1% or more.  If the current declines hold up into the close, it will be the 12th daily drop of 1% or more to end a week this year.  Going back to 1952 when the five trading day week started, there have only been five other years (1974, 2000, 2001, 2002, and 2008) where there were as many or more down 1% Fridays (or last trading day of the week) in a given year.  As you might expect, all five of those years were lousy for the stock market. 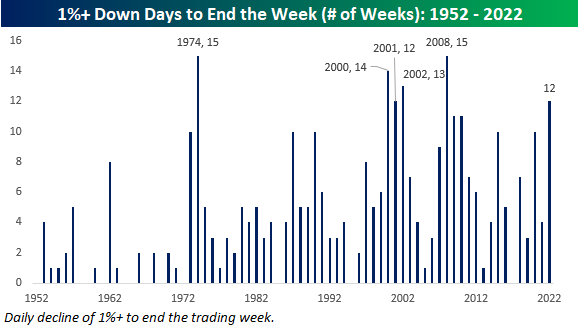 While this year is currently tied for having the fourth-highest number of 1%+ down days, the year isn’t even three-quarters done (heaven help us).  After today there are still another 15 weeks left in the year, so there is plenty of time to move up the rankings.  On a percentage basis, the S&P 500 has closed down at least 1% on the last trading day of the week just under a third (32.4%) of the time, and if that pace were to keep up for the remainder of the year, 2022 would easily set the record for the highest frequency of 1% declines to close out the week.  Never have we needed a happy hour more than this year. Click here to learn more about Bespoke’s premium stock market research service. 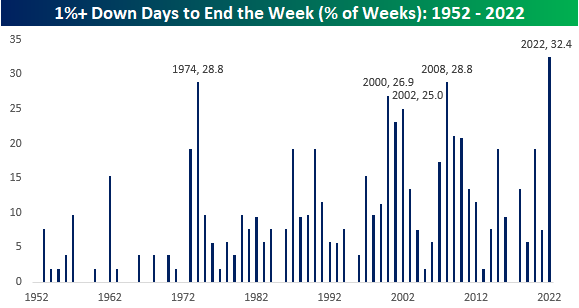