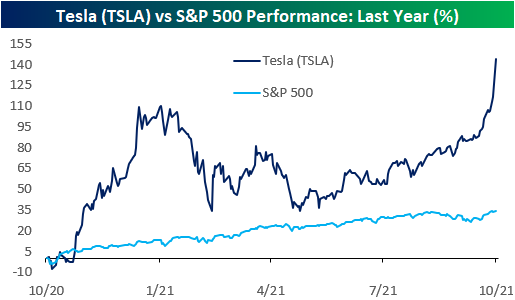 In June of this year, Facebook (FB) joined the $1 Trillion Club, bringing the total companies in this exclusive club to five at the time.  Below is a look at the one-year forward performance of the five companies that had hit the trillion dollar market cap level prior to Tesla doing so today.  Facebook (FB) rallied a bit initially after first crossing $1 trillion, but the stock has been trading lower recently and now has a market cap of ~$925 billion.  Amazon (AMZN) did the best in the year after first crossing $1 trillion, followed by Microsoft (MSFT) and Alphabet (GOOGL).  Apple (AAPL) initially performed okay after first crossing $1 trillion, but then ran into some speed bumps and was essentially flat twelve months after it became the first company to cross the $1 trillion threshold.  It of course remains to be seen how Tesla (TSLA) will do in the year ahead. 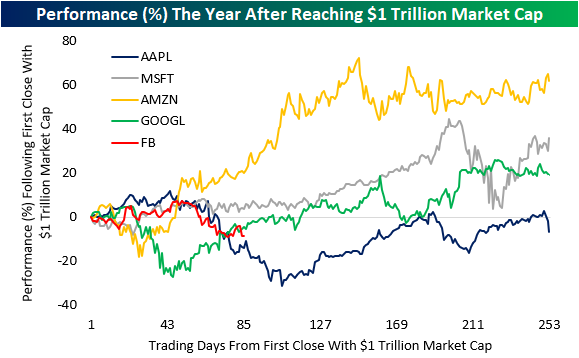 Below we extend out even further by showing each of the $1 Trillion Club members’ performance since first crossing the $1 trillion threshold.  While Apple trended sideways in the first year after crossing $1 trillion, it surged in year 2 and beyond and currently has a market cap of ~$2.5 trillion.  Microsoft (MSFT) has also kept running up to its current market cap of ~2.3 trillion.

The six companies that have been $1 Trillion Club members at any point in time currently represent 25.2% of the S&P 500. With over a quarter of the index being comprised of these names, nearly every investor is tied to their performance in one way or another. The current market cap of these six names is over $10 trillion. To put that into perspective, that is nearly half of US 2020 GDP. 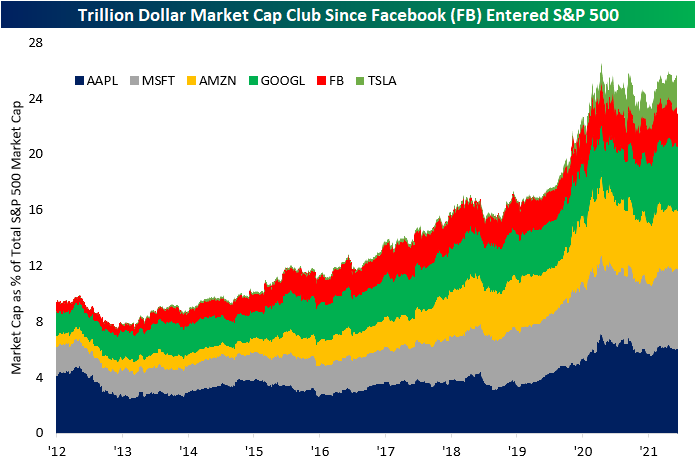