With the S&P 500 rallying 2.38% yesterday, the index notched its best first trading day of a month since last March when it rose 4.6%.  As we noted in last night’s Closer, a strong start to a month has not necessarily been a great sign for the returns for the remainder of the month. Similarly, the next day has not been met with the best performance.  As shown in the charts below, historically when the S&P 500 has rallied at least 2% on a Monday, Tuesday has seen a pullback with an average daily decline of 10 bps and positive returns only half the time.  As for the rest of the week, Wednesday has been the only day to average a move higher with positive returns more than half the time.  Thursday and Friday, on the other hand, have averaged declines of 6 and 7 bps, respectively, with positive returns only 48.68% of the time. 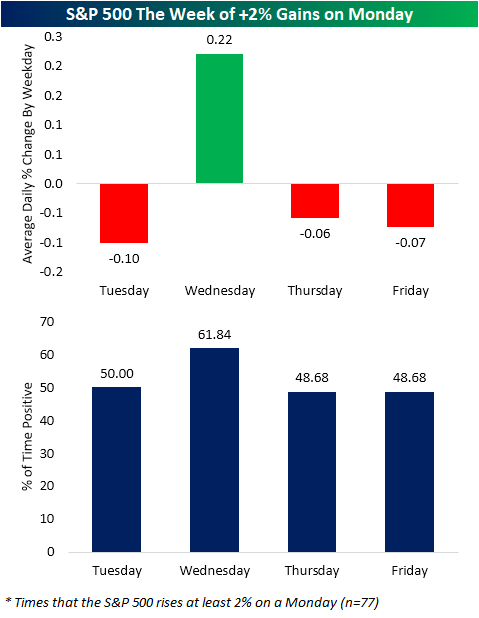 Of these instances, including yesterday, there have been 13 times that the 2% or larger gain on a Monday also happened to be the first trading day of a month.  On the Tuesday after these past occurrences, the S&P 500 has on average been flat with positive returns two-thirds of the time.  Once again, Wednesday is the only day with an average gain and like Tuesday has seen positive returns two-thirds of the time.  As for the second half of the week, returns are again negative with the weakest day being Friday which has averaged a 74 bps decline with positive returns only a third of the time.  Click here to view Bespoke’s premium membership options for our best research available. 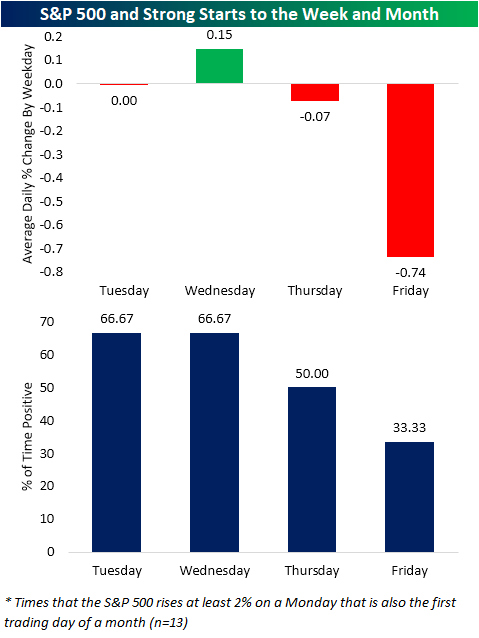