Yesterday’s 1% rally for the S&P 500 was also accompanied by positive breadth (for a change) as 412 stocks in the index finished in positive territory on the day.  On a net basis, subtracting the number of decliners from the number of advancers, yesterday’s A/D reading of +322 was the strongest breadth reading since late July.  Prior to yesterday’s rally, the strongest daily breadth reading for the month of August was +214 on August 7th.  For a month where the index was already up 4% heading into the day, that’s pretty weak.

Breadth in August has been so weak in fact that Monday’s rally was only the 8th day out of 16 trading days in August where the S&P 500 had positive breadth.  There’s still another five trading days left in the month, so breadth still has plenty of room to improve, but at the current rate, this month would go down as just the 12th month since 1990 where the S&P 500 was up over 4% but saw negative daily breadth on at least half of all trading days.  The last time that happened was in July…of this year.  And before that, May.  We’ve already had two months in 2020 where the S&P 500 was up at least 4% and half of all trading days had negative breadth readings, and we’re now on pace for the third.

The chart below shows each of the prior times since 1990 where we saw similarly strong months with lackluster breadth.  Before the two prior occurrences this year, the most recent was March 2009.  Looking at the chart, that occurrence preceded a great time to be long the market.  Before that, though, returns following similar breadth divergences were mixed as there were occurrences right in the middle of the bear markets from 2007-2009 as well as 2000-2002, and before that there were six occurrences in the 18 months leading up to the March 2000 peak.  Click here to view Bespoke’s premium membership options, including the must-have Morning Lineup report. 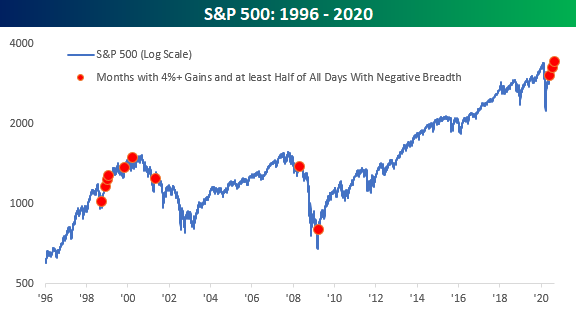