“By early October the first fall outbreaks and the memory of those in the spring had already suggested that the virus attacked in a cycle; it took roughly six weeks from the appearance of the first cases for the epidemic to peak and then abate in civilian areas, and from three to four weeks in a military camp with its highly concentrated population.  After the epidemic abated, cases still occurred intermittently, but not in the huge numbers that overwhelmed all services.” – John M. Barry, The Great Influenza: The Story of the Deadliest Pandemic in History

If you’re looking for an account of the 1918 flu pandemic as well as a great example of history repeating itself in terms of mistakes and lessons learned, John Barry’s book on the subject is a must-read.  In reading through it, so many aspects of the pandemic in 1918 have similarities to the COVID pandemic in terms of the virus’s progression and how people reacted to it.  In looking at the latest trends in the current outbreak of COVID across the country, we were reminded of one such similarity described in the above quote which described the ebb and flow of the virus across the country in 1918.

The chart below shows the seven-day average in the number of daily confirmed COVID cases across the United States. The first wave of the COVID outbreak, which was centered in the northeast, began on 2/24 when the US started to average at least one new confirmed COVID case per day.  That wave peaked 46 days later on April 10th.  Over the next 48 days, the number of cases gradually drifted lower through the end of May.  On 5/28, the decline in cases reached a low, but then started rising again as the second wave of the outbreak flared up in the sunbelt.

During the second wave of the outbreak, the number of cases quickly increased to new highs before peaking on July 22nd, a period spanning 55 days.  As case counts across the sunbelt surged, states in the northeast continued to see cases but not to nearly the same degree as they did during the first wave.  From 7/22 through 9/12 (52 days), the second wave of the outbreak started to ebb, but ever since then, we’ve started to see a renewed uptick in cases.  This time, however, the states most affected by this third wave of the outbreak have been concentrated in the midwest, while case counts in the states impacted by the first two waves are nowhere near their prior peaks.

What’s also notable about the first two waves of the outbreak is that all of the legs higher and lower have spanned a period of between 46 and 55 days or six to eight weeks.  That’s similar to the ‘roughly six weeks’ that each wave lasted during the 1918 pandemic.  Given the fact that the second wave saw more cases than the first wave, does that mean the third wave will see a higher number of cases than the second?  Not necessarily.  Anything can happen but with the states being hit hardest by COVID now collectively having smaller populations and less geographic density than the areas hit hardest in the first two waves, the likelihood of larger caseloads would seem less likely. 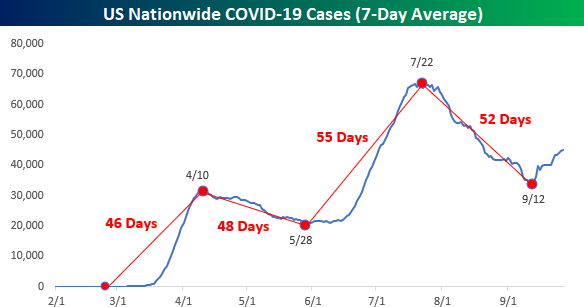 Taking the seven-day average case counts from notable states around the country further illustrates the similarities between now and 1918.  States like New York, Arizona, Florida, and California all appear to be past the peaks of the epidemic in their regions, and while case counts haven’t disappeared, new reported cases have been much less frequent and continuous than they were at their peaks.  Meanwhile, states in the midwest, like Missouri, which were previously spared by much of the new case burden, are only just now hitting the peaks of their outbreaks. How the COVID-19 pandemic progresses from here through the winter months is impossible for anyone to predict, but the fact that the current outbreak has been following similar patterns to the way the 1918 pandemic played out provides some degree of encouragement. Like what you see? Click here to for a free trial to Bespoke’s premium membership options. 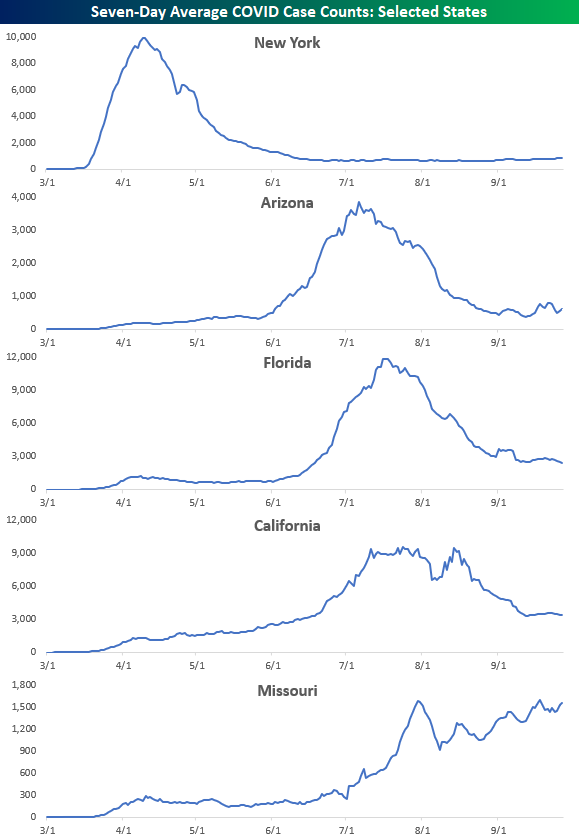