Was It The Weather?

While the weather may have artificially depressed the actual levels, today’s release of initial jobless claims came in at the lowest level since the last week of November.  Seasonally adjusted claims totaled 730K, down 111K from last week’s revised reading of 841K (from the original 861K). While claims were expected to decline, this week’s release exceeded expectations by 95K. 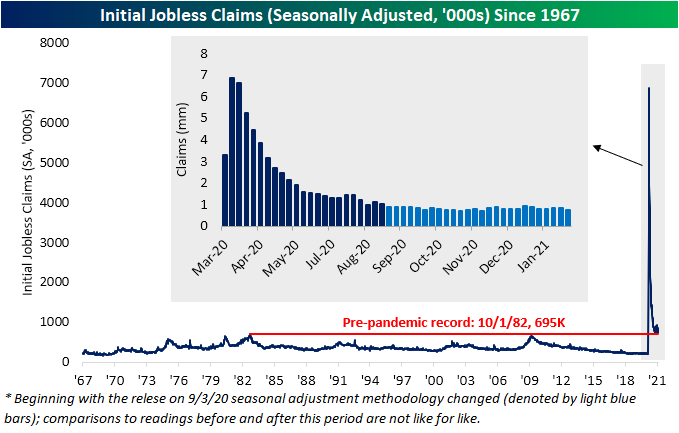 On an unadjusted basis, claims also experienced a significant decline dropping by 131.7K.  That was the largest weekly decline since mid-January when they fell by 176.7K.  At 710.3K, this week’s print was the lowest level of jobless claims since last March. We would also note that the current week of the year has historically seen claims decline.  The current week of the year (eighth) has only seen unadjusted claims rise week over week 13% of the time of all years since the data begins in 1967. 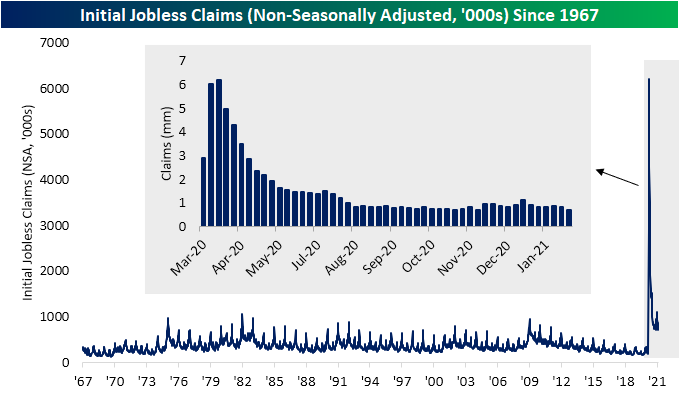 Pandemic Unemployment Assistance (PUA) also saw lower claims this week dropping from a multi-month high of 512.86K last week back down to 451.4K.  Excluding last week, that is still one of the highest levels since early December. Despite this, the coincident drop in regular state claims meant the total between the two dropped to 1.162 million which is the lowest since the last week of 2020. 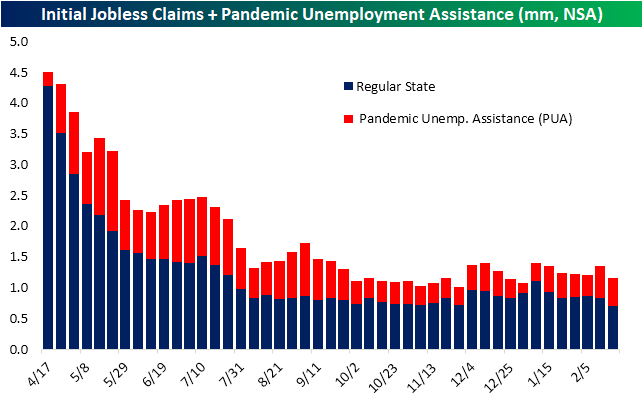 As we noted earlier, adverse weather in states like Texas was one factor that may have caused distortions in this week’s reading. While that could be a factor, we would note that other states were far larger contributors to the decline in aggregate claims. In the table below, we show the readings in regular state and PUA claims for every state for the current and past week as well as six-month charts.  The states that saw the largest declines this week for regular state claims were California and Ohio with 50K and 46K declines, respectively. These two states also accounted for the largest shares of PUA claims. The next largest decline in regular state claims was an 8.5K drop in New York and then Texas’ 7.4K decline. While that was the largest decline for Texas since November, the big drop from Ohio was more of a factor.  Accounting for over a third of the net decline in total aggregate decline this week, Ohio’s level of claims has skyrocketed recently with the additional qualm that the state has been flagging a high number of fraudulent claims. In other words, while some headlines have pointed to weather in the South affecting the lower claims counts, there are other potentially more impactful factors at play. 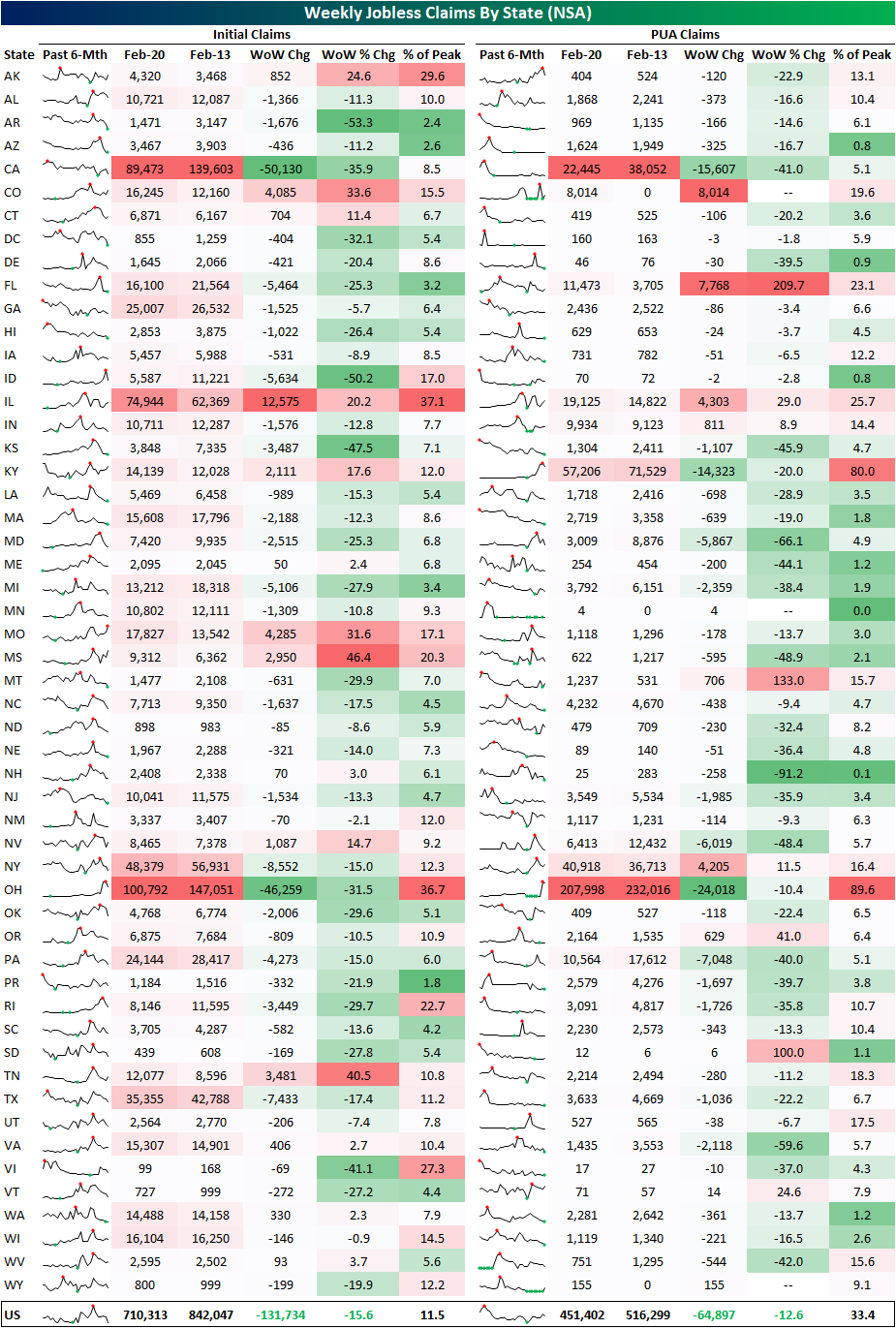 Turning over to continuing claims, the declines keep coming with claims for the week ending February 12th falling to 4.419 million.  That is the sixth consecutive decline, and once again the lowest level of the pandemic. 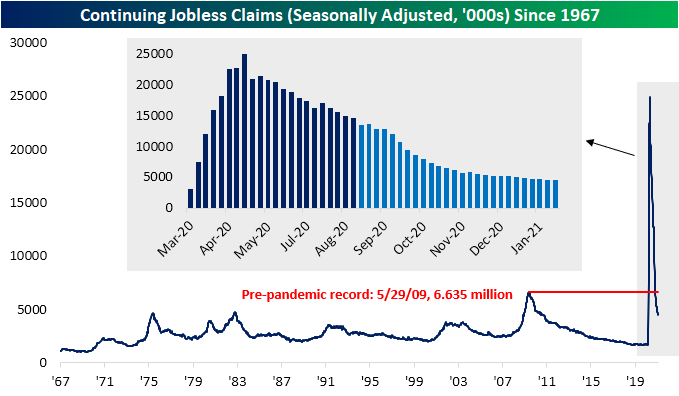 Adding in other programs creates an additional week’s lag meaning the most recent data is for the first week of February. Total claims continued to trend a bit higher moving back above 19 million almost solely due to an over 1 million uptick in Pandemic Emergency Unemployment Compensation (PEUC). Due to that increase, the program accounted for a new high of more than a quarter of total continuing claims for the week of February 2nd.  Click here to view Bespoke’s premium membership options for our best research available. 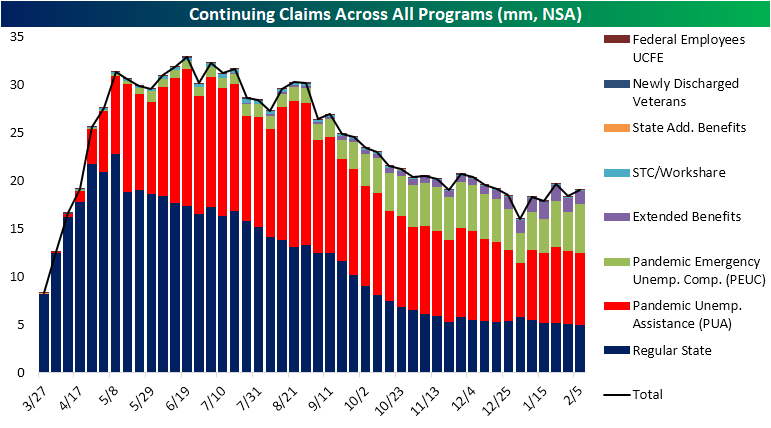 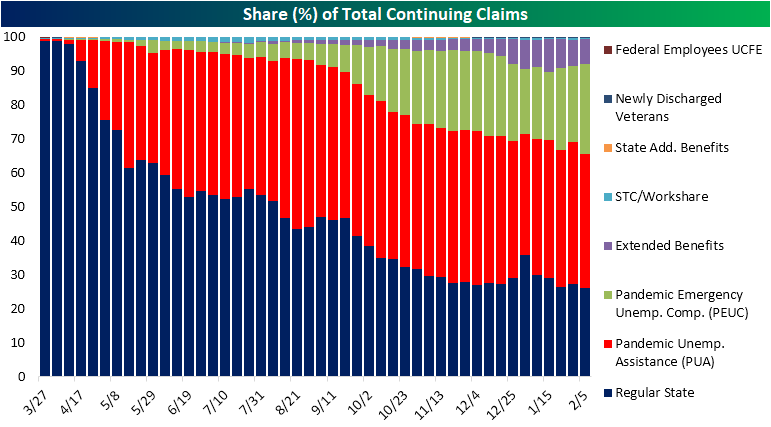