Was It the Stock Price?

We’ve all seen the impact that falling stock prices have had on investor sentiment in the last few months.  The weekly poll that the American Association of Individual Investors (AAII) takes of its members recently showed the lowest level of bullish sentiment since 1992.  You read that right.  Even during the depths of the Dot Com crash, the Financial Crisis, or the COVID crash, bullish sentiment bottomed out at higher levels than it has in the COVID unwind.

General consumer surveys have also cratered.  Despite what we’re told is a strong labor market (for now) and the world moving on from COVID (even if parts of the world and some groups would prefer that people remain in lockdown indefinitely), we have raging inflation, rising crime, geopolitical uncertainty, gas prices at record highs, and a more politically divided populace than we’ve seen in decades.  Consumers are among the most downbeat they’ve ever been.  The monthly poll from the University of Michigan has even dropped to levels not seen in the entire 40+ year history of the survey.

The shift in sentiment extends beyond the sphere of investors and consumers and into the C-suite as well, most notably in the former high-flying tech/growth sector. Traditionally, these companies have looked like a utopian oasis with amenities, perks, and employee accommodations that the average American could only dream of.  Just google the term “google headquarters inside” and you’ll see what we mean.  From an outsider’s perspective, it seems like an employee can take a day off (or days off) simply for reasons like they aren’t feeling it or if their favorite team lost a game the night before.

It’s probably not that extreme.  There’s a reason these companies became among the most valuable in the world, and it wasn’t because everybody just has fun and does nothing.  But in terms of their ‘images’, they made it seem like working at their companies was like going to summer camp.  When a company’s stock price shoots higher, showering perks on its employees and advertising them for the press to see is just a way of showing how much better the company is than all the ‘old’ economy stocks.

This year, we’ve started to see a shift in the attitude of companies towards their employees, and the two most notable were recent comments from Netflix’s Reed Hastings and Meta’s Mark Zuckerberg. Over the last year, there has been well-covered discontent among Netflix employees regarding some of the streamer’s programming and it not fitting in with their personal views.  In early May, Hastings responded to these concerns with a long memo that included the suggestion “If you’d find it hard to support our content breadth, Netflix may not be the best place for you.”

Up north in Palo Alto, a similar shift has played out at Meta Platforms (META), formerly known as Facebook.  In a Q&A session last week, Zuckerberg warned employees that the company was facing one of the steepest downturns in its history, and just after rebranding employees of the firm as his ‘metamates,’ he continued by saying “there are probably a bunch of people at the company who shouldn’t be here.”  Ouch, mate!

So what explains the shift in tone among these CEOs from ‘kumbaya’ to ‘don’t let the door hit you on the way out’?  Could it be the stock prices?  As shown in the charts below, in the cases of both Netflix and Meta Platforms, the shift in tone has come after major declines in each company’s stock where prices have been more than cut in half.  Just like many of us common folk, it looks as though stock prices can also have a big impact on the mood of CEOs.  Click here to learn more about Bespoke’s premium stock market research service. 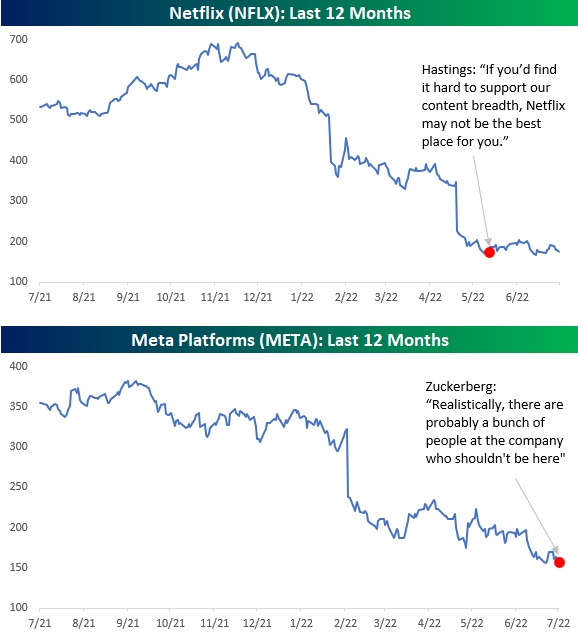