Late last week, Democratic Presidential hopeful Elizabeth Warren quite literally doubled down on her proposed wealth tax, announcing that the annual tax rate on billionaire’s net worth would be 6% rather than the previously proposed 3%.  Friday afternoon, we tweeted the chart below showing how many years it would take for some of America’s wealthiest people to lose their “billionaire” status given this tax’s erosion on their wealth.  This is based on their current reported net worth (from a simple Google search) and doesn’t assume any appreciation or depreciation of assets from here.

Some of the most famous billionaires in the country like JP Morgan Chase CEO Jaime Dimon, Oprah, Michael Jordan, and even the President would no longer be billionaires less than 20 years down the road if taxed at Warren’s proposed 6% rate.  For others like Bridgewater Associates’s (one of the world’s largest hedge funds) Ray Dalio, Dallas Cowboys owner Jerry Jones, or Tesla/SpaceX’s Elon Musk, it would take a bit longer to lose the billionaire status.  As for the richest man in the world with a net worth of roughly $110 billion — Amazon’s founder Jeff Bezos — he has less to worry about as it would take just a couple years less than the average American’s lifespan to no longer be a billionaire.  Granted, the first wealth tax check written to Uncle Sam would total $6.6 billion for Bezos, and that doesn’t even include other taxes (e.g., income, property, capital gains).  Start a two-week free trial to Bespoke Premium to access our daily research and interactive tools. 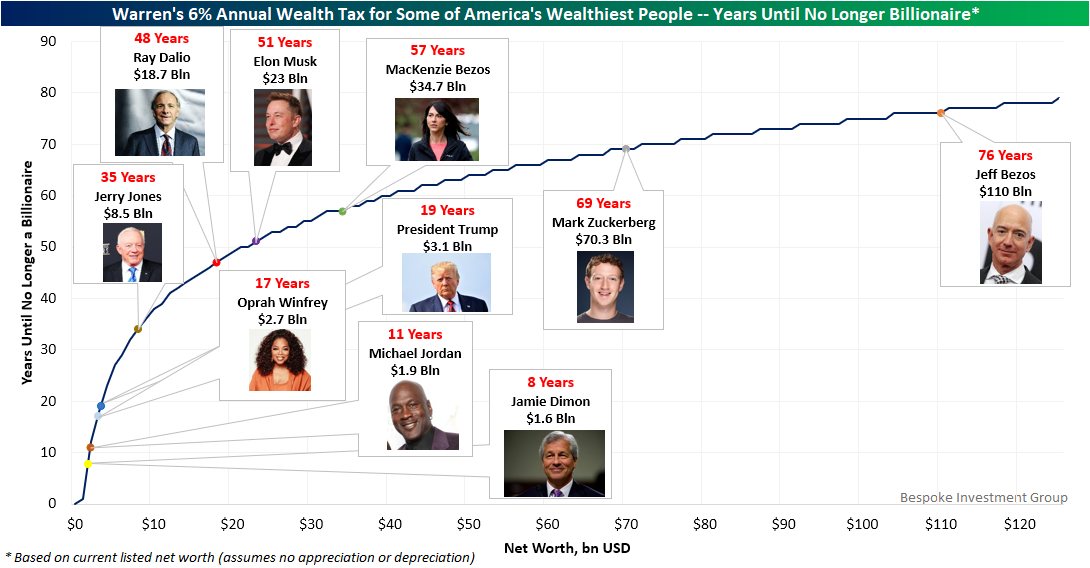