From late summer through mid-November, betting markets (electionbettingodds.com) gave Senator Elizabeth Warren a considerable lead in the Democratic primary race. In fact, from late September through mid-October, betting markets gave her around a 50/50 shot at winning the primary. While there have been other spikes of interest in certain candidates like for Harris in July and Bloomberg more recently, no other candidate has been given the same type of high win probability at any point in the past several months.  With that said, no other candidate has seen the type of fall from grace that Warren has either. As Warren’s policies and tactics like a wealth tax, attacks on billionaires, and health care reform have come under increased scrutiny, betting markets have retreated in their pricing in of a win for the senator. Warren’s probability to win the Democratic nomination is now down to just 16.5%. That is a 36.4 percentage point drop from the high. The only comparable decline is the 32.2 percentage point fall from the high for Senator Kamala Harris. This decline has led markets to give both Mayor Pete Buttigieg and former Vice President Biden higher chances of winning than Warren. 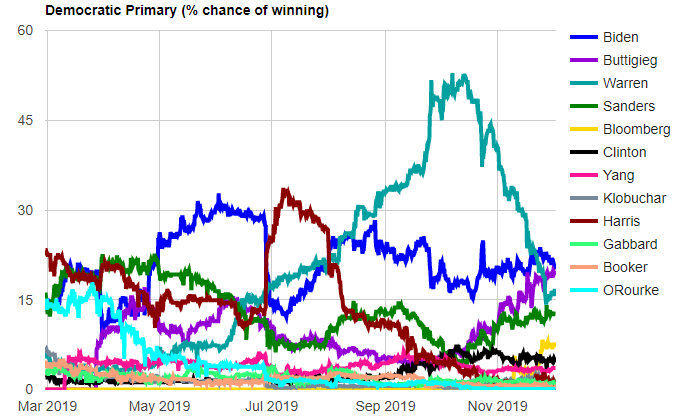 Taking a look at more primary data, this time from the Morning Consult’s weekly survey of Democratic Primary voters, Warren’s falling out of favor has been less dramatic but is in place nonetheless.  After her favoritism among Democratic primary voters was on the rise consistently all year, it peaked out at 21% and has been rapidly declining over the past few weeks while Sanders and other candidates who have held a smaller share of votes, namely Buttigieg, have been on the rise.

Warren’s costly Medicare For All plan would essentially put private sector health insurers out of business.  Her rise in the polls in 2019 did major damage to the insurers, and that held back the broad Health Care sector ETF (XLV) as well.  That’s why Warren’s fall in the polls recently has gone hand-in-hand with a sharp rally for the Health Care sector, as shown in the second chart below.  Start a two-week free trial to Bespoke Institutional to access our research reports, interactive tools, and more. 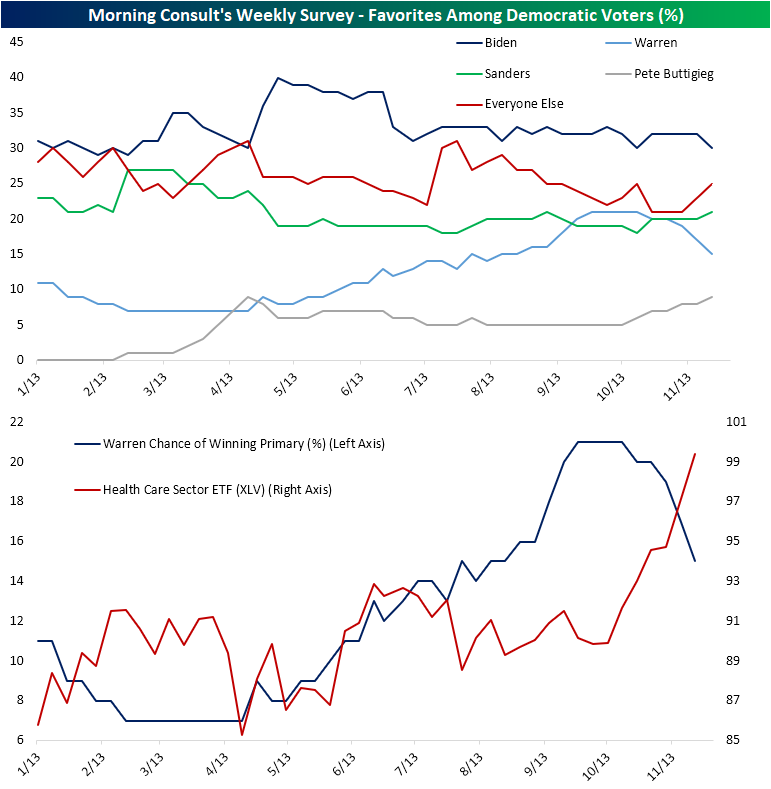