Given the big rally off the lows of late March, we’ve had a number of questions related to the VIX and why it remains high.  As of Tuesday afternoon, the VIX was in the mid-40s which is very high relative to readings over the last decade but actually down significantly from its recent highs above 80.

The reason the VIX is still in the 40s is because the market remains volatile.  While volatility is typically associated with markets that are moving lower, it can actually go both ways, which is exactly what we’re seeing now.  The charts below do a good job of illustrating just how extraordinary the market’s swings have been in recent weeks.  In many cases, it’s unlike anything anyone reading this has ever seen before.

Over the last five weeks, the S&P 500’s average absolute daily percentage change has been +/-4.8%.  That’s higher than we saw at the height of the financial crisis, after the 1987 crash, and in the late stages of the Great Depression.  The only time the S&P’s average daily move over a five-week period was greater was after the Crash of 1929. 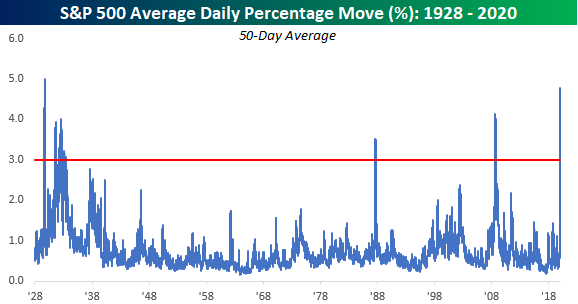 Tuesday’s rally also puts the S&P 500 on pace for its 13th straight day of moving up or down 1% or more. That’s a longer streak than anything seen during the Financial Crisis and just two shy of the 15 straight days we saw in October 2002 at the lows of that bear market.  Before that, though, the only other period where there was a longer streak of 1% daily moves was during the Great Depression. 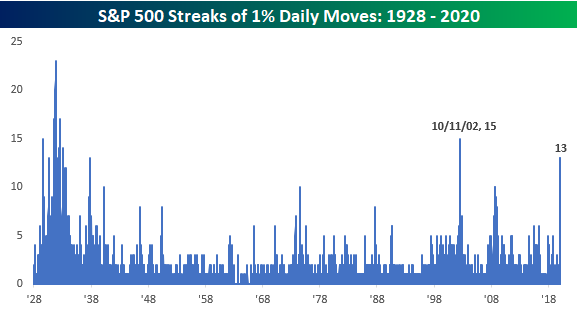 While 13 straight daily 1% moves is extreme by any measure, what makes this current streak even more notable is that it would be the second 13-day streak of 1% moves in the last 27 trading days.  That’s right, from 3/2 through 3/18, the S&P 500 went 13 straight days of moving up or down 1%.  Then, on 3/19, the S&P 500 broke that streak by rallying just 0.47%.  Since then, though, it’s been 1% all the time again with the S&P 500 on pace for its 13 straight daily move of 1% again.  Looking at this another way, in the last five weeks (25 trading days) the S&P 500 has seen a 1% move 24 times. The only other time that has occurred was during the Great Depression when there were two separate occurrences.  Start a two-week free trial to one of Bespoke’s three premium memberships to see our best and most actionable market analysis. 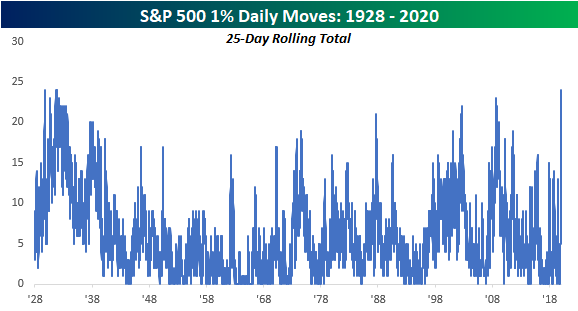