In the business world, there’s an axiom that says: when your company name becomes a verb, you’ve arrived.  Take the example of Google in the late 1990s.  When people started replacing the phrase ‘online search’ with ‘Google it’, you just knew that Google was going to be a big company.  Since its IPO in 2004, Google – now called Alphabet (GOOGL) – has been an absolute behemoth, posting a total return of 6,073.9% and an annualized gain of 26%. GOOGL has taken over the internet search business over the years, making it one of the world’s most influential companies and the ultimate verb stock. 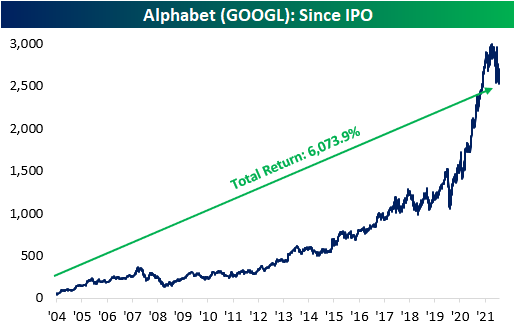 While GOOGL is an example of a verb stock that has seen stellar returns, a group of more recent verb stocks hasn’t fared nearly as well.  Over the past few years, certain companies have introduced products and services that have become so integral to their daily lives that their names have become verbs.  Owe someone money for lunch?  Just venmo them.  Not feeling well?  Might be a good idea to schedule a teladoc appointment with your doctor before going out.  Need to sign a document?  No need to print it out and fax it back.  Just docusign it.  Have a client meeting but traffic is a nightmare? Why don’t you just hop on a zoom.

The services these companies offered became necessities of daily life during the pandemic, and because of that their stocks surged. We created an equally-weighted basket tracking the performance of PayPal (PYPL), Teladoc (TDOC), DocuSign (DOCU), and Zoom (ZM).  From the start of 2020 (right before the pandemic) through the basket’s peak in early 2021, these stocks tripled.  Around that point, investors began to question what the outlook for these stocks would be when the economy re-opened, but proponents argued that the services these companies offered provided such a convenience that they wouldn’t miss a beat.

While consumers around the world are still venmo-ing, teledoc-ing, docusign-ing, and zoom-ing, the stocks of all these companies have been imploding.  The basket of four stocks has now erased all of its COVID gains and is now in the red relative to where it traded at the start of 2020. 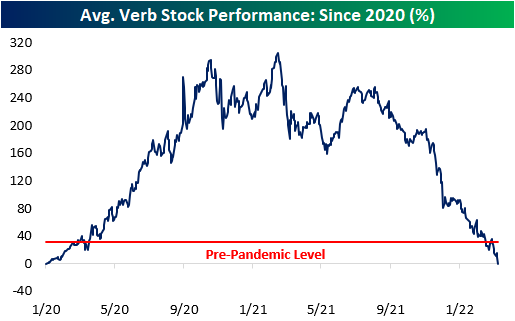 Although there is a little bit of variation in the performance of these four stocks, the overall trend is largely similar. Of the four, ZM is the only one that is still positive relative to where it started in 2020.  PYPL, TDOC, and DOCU, on the other hand, have declined 11.4%, 33.6%, and 4.1%, respectively. As you can see from the graph below, these stocks have round-tripped, erasing all of the gains provided by the pandemic. While valuations were certainly stretched for a while, the fact that these stocks are lower now than they were before COVID, even after proving their worth during the pandemic, shows how much sentiment has shifted in the last several months.  One trend not working in favor of these verb companies is competition.  As the pandemic proved the viability of their business models, competitors have been quick to step in.  These days, someone may ‘venmo’ you using the CashApp, do a ‘teladoc’ appointment through CVS, ‘docusign’ an application using Adobe E-signature, or do a ‘zoom’ over Teams or Google Meets. Click here to read Bespoke’s premium research. 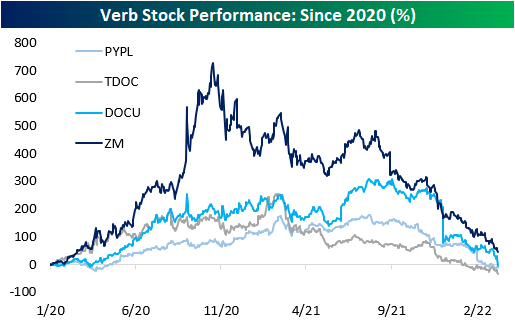