It’s been quite a ride for small-cap stocks this year.  The chart below shows the relative strength of the Russell 2000 (small caps) versus the S&P 500 (large caps) since the start of 2018.  Heading into the pandemic, underperformance on the part of small caps was nothing new, but just as the pandemic accelerated a lot of trends already in place, it also exacerbated the underperformance of the small caps.  From the S&P 500’s high on 2/19, small caps cratered on both an absolute and relative basis.  By March 18th, the Russell 2000 bottomed in terms of its performance relative to the S&P 500, but the downside move which lasted only a month took a lot longer in the opposite direction as it wasn’t until eight months later that the relative strength of the Russell 2000 versus the S&P 500 rebounded back to its level from 2/19.  Since erasing all of its post-2/19 losses, though, small caps have continued to outperform. 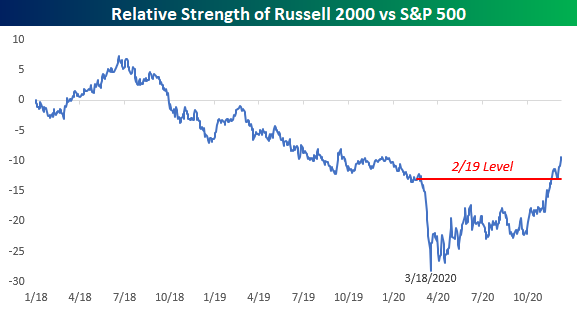 In terms of the sectors driving the rally in small caps, there have been some big moves, and it hasn’t necessarily been the same sectors that have performed the best in the large-cap space.  The table below shows the performance of S&P 500 and Russell 2000 sectors since the Russell 2000’s relative strength versus the S&P 500 bottomed on 3/18.  First of all, the only small-cap sector which has outperformed its large-cap peer is Communication Services, whereas Consumer Discretionary, Energy, and Health Care have all outperformed their large-cap peers by more than 75 percentage points.

Starting with the sectors whose performance ranks have been similar in both indices, Consumer Discretionary has been the top-performing sector regardless of market cap while Utilities has been the worst-performing sector in both the S&P 500 and Russell 2000. Other sectors that have similar performance ranks within both market cap groups are Industrials, Materials, and Real Estate.  In terms of the differences between market caps, the three that stand out the most are Communication Services (6th best in S&P 500, 10th best in Russell 2000), Health Care (8th S&P 500, 4th in Russell 2000), and Consumer Staples (10th in S&P 500 and 7th in Russell 2000).  When it comes to sector allocation, market cap is often overlooked, but within the small and large-cap spaces, sector leadership often varies widely.  Start a two-week free trial to Bespoke Institutional for instant access to all of our research and interactive tools. 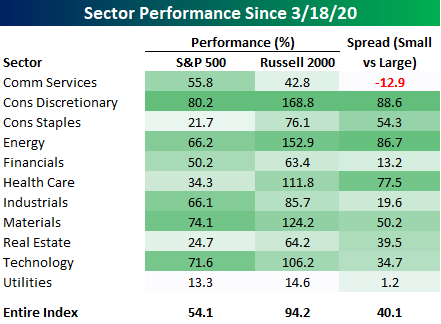