In last night’s Closer, we noted how until February the Momentum factor (MTUM) was keeping up with Value (VLUE), but it has since given up ground as VLUE, even after stumbling of late, remains the clear top performer of the four factor-based ETFs from MSCI.  On a total return basis, VLUE has gained 45.42% over the past year which is roughly 7 percentage points more than the next best performer: the Quality ETF (QUAL).  Granted, that return was even stronger at 51.49% at the high on June 4th. With VLUE’s outperformance having wavered over the past month, QUAL has been gaining ground.  Additionally, although QUAL has underperformed, alongside Minimum Volatility (USVM) there has been a much less ‘exciting’ and steady grind higher than VLUE or Momentum (MTUM). Click here to view Bespoke’s all of Bespoke’s premium membership options and to sign up for a trial. 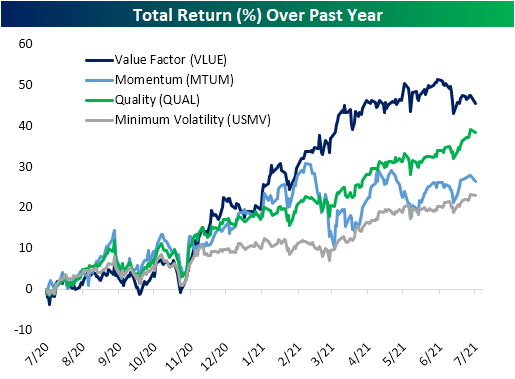