With equities recovering a massive share of the declines from earlier in the year, valuations have gotten a bit elevated.  As shown in the chart below, the trailing price to earnings ratio of the S&P 500 is now in the 99th percentile of the past decade.  At the moment, the S&P 500’s P/E ratio of 22.5 is the highest since January and February of 2018. Prior to that, the last time that the S&P 500 had a P/E around this elevated level was in late 2009 and it was even more elevated in the late 1990s/early 2000s. As for the individual sectors, Technology is also in the 99th percentile of the past decade’s range with the only higher readings being in February of this year right around the time of the last all time high for the S&P 500. Consumer Discretionary is trading at even more of a premium. Its 33.4 P/E is at its highest level since September of 2009 after rocketing higher over the past few weeks.  As for the other sectors, Communication Services is the only other sector in the 90th percentile or better of the past decade while Health Care, Real Estate, Industrials, and Materials are all in the 75th percentile or higher. Financials and Utilities have more modest valuations on a P/E basis in the 39th and 57th percentiles, respectively. 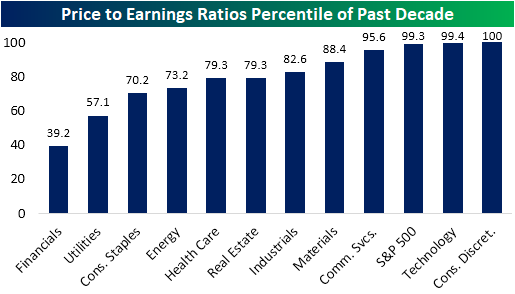 For the sectors like Consumer Discretionary, Communication Services, and Technology as well as the S&P 500 itself, these premiums are similar to earlier this year at the last all time high on 2/19 (second chart below).  Back then, all of these sectors were trading in the 99th or 100th percentile of their 10 year range.  Utilities was another sector with an elevated valuation, but fast-forwarding to today, its valuation is much more modest. Other sectors like Real Estate and Consumer Staples are similarly at less of a premium than back on 2/19. 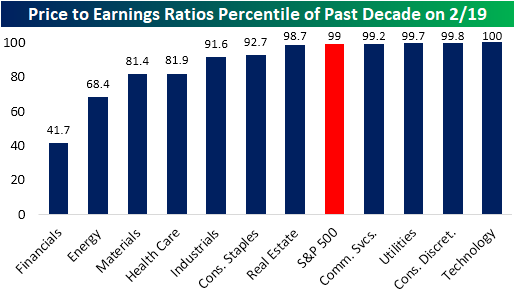 Additionally, valuations are appearing a bit stretched relative to their 10 year range on a price-to-book basis.  In the past ten years, the S&P 500 has only had a higher PB ratio (currently 3.66) earlier this year in January and February. Prior to that you would need to go back to the late 1990s around the dot com bubble to find a higher PB ratio for the index. Meanwhile, the PB ratios of Consumer Discretionary, Health Care, and Technology are at their highest levels of the past 10 years. Energy on the other hand is still at the low end of the past decade’s range similar to Materials and to a lesser extent Financials.  Click here to view Bespoke’s premium membership options for our best research available. 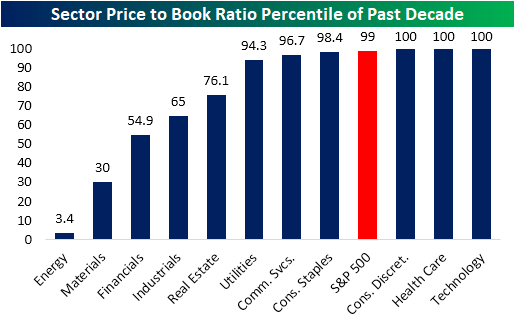 Back in November of last year through February of this year, the S&P also had its price to book, similar to its price to earnings, at the high end of the past ten years’s range. Yesterday marked the first time that the PB ratio was in the 99th percentile of the past ten years without another occurrence in the prior 60 days since November of last year. For the PE ratio it was the first time since February. As shown in the tables below, for the PB ratio that is also only the sixth time that has happened since 2000.  Following such occurrences, the S&P 500 has leaned towards weaker than normal performance, especially in the short term (week and month). Although a very small sample size, the same can also be said for the price to earnings ratio.  Click here to view Bespoke’s premium membership options for our best research available. 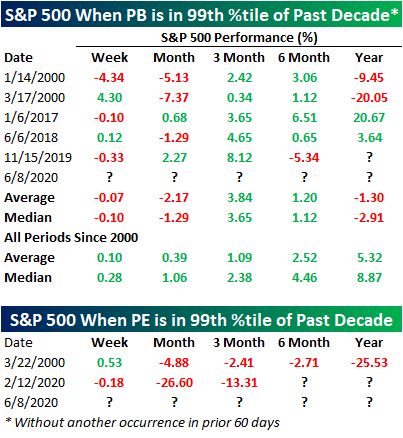