Vaccinations for COVID have begun to roll out around the world over the past few weeks with over 2 million people in the US having received their first dose as shown in the chart from our Morning Lineup below. 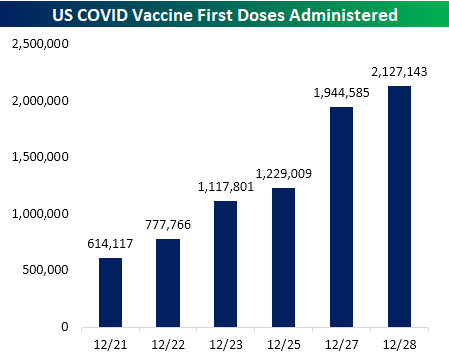 There are two vaccines currently available to the public: one from Pfizer (PFE) and the other from Moderna (MRNA).  These two companies released the efficacy results of their vaccines over a month ago back in November with PFE the first of these on 11/9 and MRNA coming one week later on 11/16. In the case of Pfizer, the stock heads into year-end basically flat on the year and that is also right about where it stood at the time of that efficacy announcement.  Granted, PFE originally surged alongside the rest of the equity market in the wake of its announcement in November.  From 11/9 through its 52-week high on 12/8, PFE had gained 14.5%. Only a few days after that peak, the FDA issued an emergency use authorization for the vaccine, but that is when losses began to pileup for PFE as investors cashed in on the news.  Since the FDA authorized its vaccine, Pfizer’s stock has dropped 10.24%. The first vaccines from PFE being administered to the public have also not provided any respite as the stock is down 5.87% since that date.

The vaccine saga has played out a bit differently for Moderna (MRNA).  Overall, the stock has seen far larger and more positive moves than PFE.  MRNA started off the year at under $20/share but has nearly quintupled through today. By the time the company announced the efficacy of its vaccine on 11/16, it was up just over 400% on a year-to-date basis. Like PFE, that announcement provided a further boost as the stock rose 73% from November 16th through its high on December 8th.  But just like PFE, the stock has fallen sharply as the vaccine has actually found its way into the arms of Americans.  MRNA has declined 18.68% since the FDA authorized its vaccine and it is nearly down 10% since the first doses were administered. While MRNA has seen a sharper decline since its peak, it has performed much better than PFE on the year, rising nearly 500%.  In the cases of both stocks, though, the trade was the same for PFE and MRNA: buy the rumor that the FDA would authorize the vaccines based on the efficacy announcements and sell the news of the actual FDA authorization and vaccine rollout.  Click here to view Bespoke’s premium membership options for our best research available. 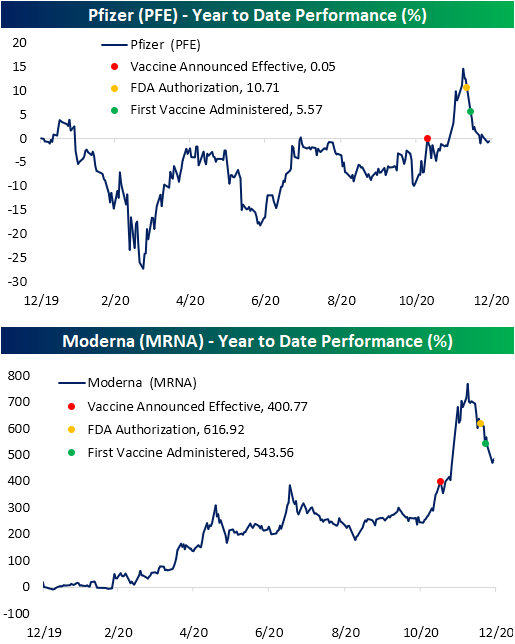