US Outperforms the Rest of the World… Again

In January of this year, we looked at the relative performance of the United States versus the rest of the world (ROW). At the time, ROW was making up lost ground relative to the US, but that didn’t last long. Through the first three quarters of 2021, the US (SPDR S&P 500 ETF-SPY) picked up steam once again and has significantly outpaced both the rest of the world (Vanguard FTSE All-World ex-US ETF- VEU) and emerging markets (iShares MSCI Emerging Markets ETF- EEM). Emerging markets have been the underperformers of the group while the US has led. Although EEM outperformed at the beginning of 2021, the index has since moved lower while the US trudged higher right up through early September. YTD through the end of Q3, SPY has outperformed EEM by 19.5 percentage points, which ranks as the second-widest spread between the two ETFs since EEM started trading in 2004. While not to the same degree, the US has also notably outperformed the rest of the world as well with a performance gap of 12.4 percentage points. 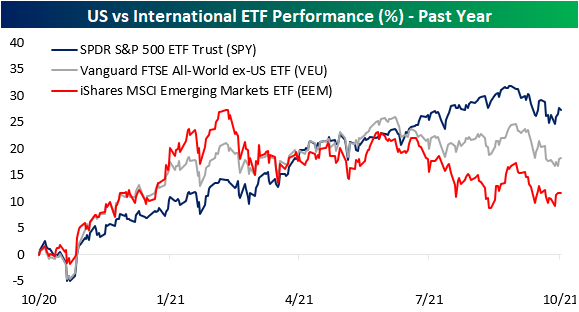 Over the last 17 years, Q4 performance has been mixed after the performance spread between SPY and EEM during the first three quarters of the year was in the double digits. Since 2004, there have been five prior occurrences, and in three of those years, SPY continued to outperform in Q4 while it lagged twice. Over the last decade, EEM has only outperformed SPY two times through the end of Q3 (2016 and 2017), and this year is the fourth in a row where SPY outperformed EEM. 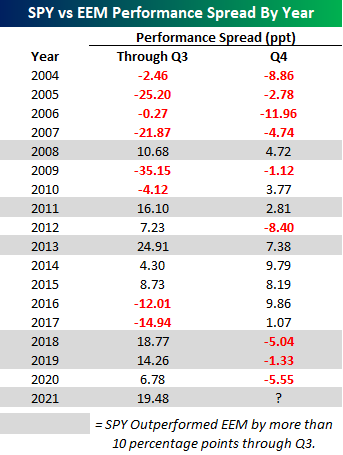 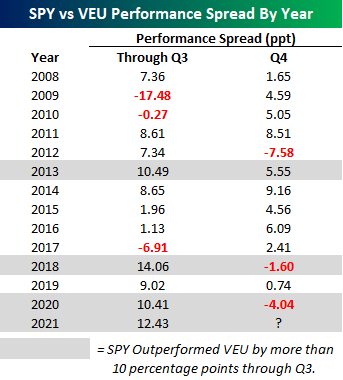