With numbers like we saw in last Friday’s employment report, the current downturn no doubt ranks as one of, if not, the steepest downturns in US history.  What started in March still hasn’t been officially designated a recession, but unlike prior downturns when investors and economists usually couldn’t even initially agree on whether the economy was in a recession or not, the only question this time around is how long and deep it will be.  Because the drop-off in economic activity was so sharp and sudden, by some measures we may have already seen the depths of the contraction.  If that ends up being the case, though, one could even argue that whatever it is we’ve been going through the last several weeks doesn’t even meet the criteria for a recession.

Huh? According to the NBER, which is the organization in charge of classifying recessions, they are characterized as “a significant decline in economic activity spread across the economy, lasting more than a few months, normally visible in real GDP, real income, employment, industrial production, and wholesale-retail sales.”  Economic activity essentially peaked in February to early March before the lockdowns started, and from there, the economy came to an absolute standstill.  With parts of the economy already starting to open up, though, if that trend continues, the trough of the contraction would have occurred in April.  At that rate, the entire contraction would have spanned a period of two months at most.  While the definition of a ‘few’ isn’t a specific number, if a couple is two, then a few would be three or more.

Whether the length of the economic contraction ultimately meets the criteria for an official recession is irrelevant.  The fact is that never before have we seen such a large number of Americans lose their jobs in such a short period of time, and if businesses aren’t able to get back up and running soon, the dislocations it causes will take years to repair.  So how long does a pandemic induced recession typically last?  Unfortunately, there aren’t a lot of examples on that front.  The chart below shows the length of US economic recessions going back to 1900, and while the recession brought on by the Spanish Flu back in 1918 wasn’t the shortest recession of the last 120 years, at just seven months, it was the second shortest and wasn’t even long enough to result in a bear market for the Dow.  As crazy as the market’s rebound off the lows has been in the last six weeks, can you imagine if Twitter was around in 1918 when in the midst of that pandemic the DJIA never even saw a peak to trough decline of 11%?  Start a two-week free trial to Bespoke Institutional to access our full library of research and interactive tools. 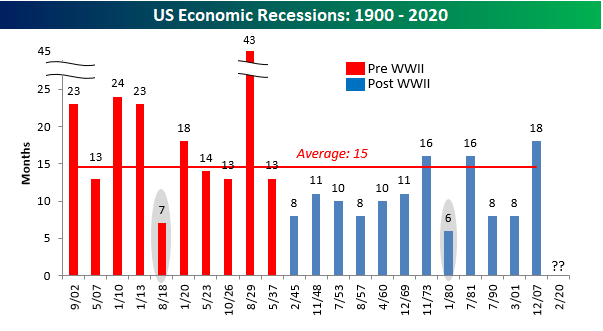